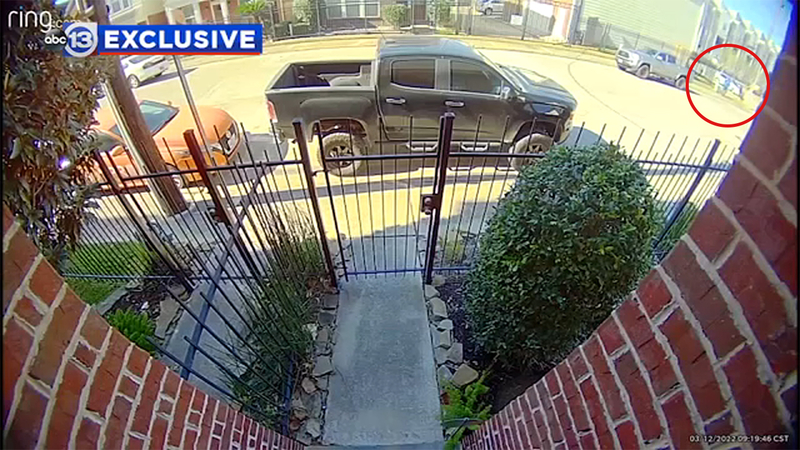 HOUSTON, Texas (KTRK) -- A woman walking her dog was assaulted by a man in broad daylight in East Downtown on Sunday morning.

"He was kind of laughing and he wasn't scared someone was going to see him," the woman, who wants to remain anonymous, told ABC13. "He was grabbing my butt and tried to grab my crotch. He was touching me inappropriately."

ABC13 exclusive camera footage from a neighbor captured a white sedan pull up near the intersection of Pease Street and Delano Street. A man matching the same description she provided -- a Black man, about 5'6", in his late 30s, wearing a blue hoodie with white markings -- can be seen getting out of the car around 9:15 a.m.

Around a minute later, the video shows the man get back in the car and drive further up the block. He stopped, and a woman is captured walking her dog. The man then got out of his car and followed the woman. That's when screams could be heard, while the woman said she felt him grab her.

"I continued to walk and proceeded across the street and my dog started growling and I realized someone was touching me," she said. "I step back onto the sidewalk and I was face-to-face with him and started screaming saying, 'What do you think you're doing?' I was in shock. He tried to do it again and it clicked, 'This could be dangerous really quickly for me.'"

Fearing the worst, the woman ran back towards her house.

"When I was running away, he was casually walking away," she recalled. "He wasn't worried anyone was going to get him. He didn't look scared, he was happy, like he was enjoying it."

The victim filed a report with Houston police, who confirmed that they are investigating. ABC13 has not heard back about whether there have been similar reports in the area, matching the same description as the suspect.

The woman is thankful nothing worse happened to her, but she believes the fact he was so brazen shows it is not the first time he's done this, and won't be the last.

"I know he's not the only one," she said. "We as a community can make these people feel more scared. They feel so entitled to be able to do this. They need to know there are consequences."

#EXCLUSIVE: A woman walking her dog is assaulted in broad daylight. A neighbor captured the terrifying moments on camera. She believes the fact he was so brazen shows he's done this before, and will again. Her story coming up on @abc13houston at 10 p.m. pic.twitter.com/R5zy2bIPHZ