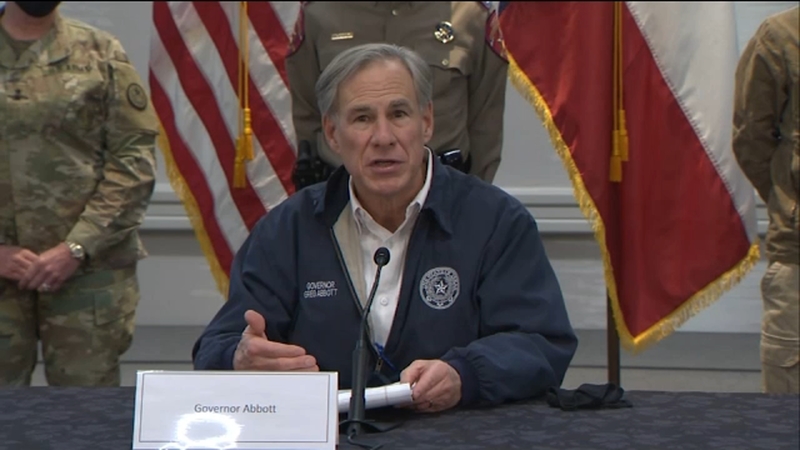 AUSTIN, Texas (KTRK) -- Gov. Greg Abbott on Thursday touted improvements in getting power back to Texans, with 2 million households getting energy since yesterday.

According to Abbott, there remained 325,000 Texans still without power, which he says is entirely due to either power lines that are down or "the need to manually reconnect the premises of power."

"There are no outages of power across the state of Texas because of lack of generation or lack of the ability to generate power," Abbott said.

He offered that bit of good news with a warning, though, saying there is a looming freezing weather threat late Thursday night.

"We hope and anticipate no location to be without power tonight," the governor said, pledging that ERCOT, the state's grid operator, will work to manage the power.

Abbott also said power companies have every available repair crew dispatched in preparation of potential damage from the weather event.

In terms of the water issues statewide, the governor made normalizing water a priority through a major disaster declaration with the White House. Abbott requested the declaration, and if granted, he said it "will give Texans the ability for individual assistance from FEMA" to fix broken pipes.

Overall, Abbott made an overwhelming vow to Texans that this should not happen again.

"That starts with reforming the agency in charge of electric reliability in Texas, which is ERCOT. What happened this week is absolutely unacceptable," said Abbott, who added more emergency items to the currently Texas legislative session. Among the items he mentioned were mandating the winterization of Texas generators and the power system, and calling for the funding needed to make that happen.

"Everyone knows how challenging the past few days have been for our fellow Texans," said Abbott. "I want everyone to know that all of us believes it is completely unacceptable that you had to endure one minute of the challenge that you faced."

By Thursday afternoon, ERCOT said rotating outages will be needed again as the demand for power rises with people returning home with energy.

THURSDAY A.M. UPDATE: ERCOT leaders said there was "significant progress" in restoring power to millions of Texans overnight, but work still needs to be done. In the video, hear from the council's CEO and how they are answering to additional questions about what happened during the outages.