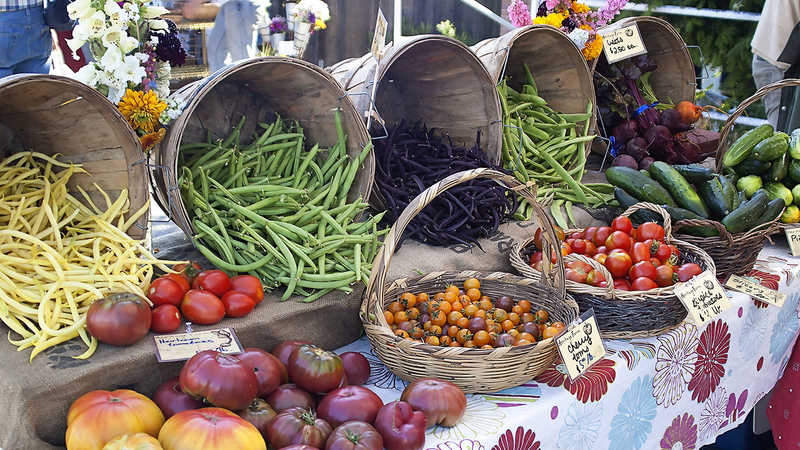 HOUSTON, Texas (KTRK) -- Summer is here, and that means it is farmers market season.

Chef William Wright of Helen in the Heights and Helen Greek Food and Wine explains that with the right strategy, you can save money, and find the right ingredients for an easy dish.

First, get a lay of the land.

"I think walking it first, giving yourself an idea of the best items and then going back and picking everything up is going to be the way to go," Wright explains.

Purveyors are on site, so take advantage of their expertise and ask for recommendations.

Wright also suggests shopping right before the market closes for the best deals. Vendors would rather cut a deal than bring back unsold produce.

"They'd much rather sell you a little bit of it than take it home," Wright says.

Bring cash. Vendors may not accept credit cards, or you may get a deal by paying cash instead.

After picking up local honey, pecans, and olive oil from a vendor in the Texas Hill Country, we set off to Helen in the Heights to whip up an easy appetizer that also works as a satisfying lunch.

Wright mixes a variety of cheeses with eggs, Greek yogurt, and the farmers market pecans.

He then folds it into frozen store-bought phyllo dough, and then brushes it with the local olive oil from the farmers market.

After baking until golden brown, Wright tops with the additional pecans and local honey from the market.

"It's all kinds of wonderfulness," Wright says.

Cup of Texas pecans, plus extra for garnish

Combine eggs, feta, ricotta, grated kefalograviera, and Greek yogurt in a medium mixing bowl. Stir gently until combined. Add a pinch of nutmeg and stir again. Line 1-2 baking sheets with parchment paper. Lay 1 sheet of phyllo on a work surface with the long side facing you.

Brush lightly with some of the olive oil. Top with a second sheet and brush with more olive oil. Cut the pastry lengthwise into four 12-inch-long strips.

Mound a scant tablespoon of the cheese filling in the center of the end of each strip. Working with one strip at a time, fold the bottom edge up to meet the left edge and form a triangle.

Fold the triangle up, then over to meet the right edge, keeping its triangular shape. Continue folding up the length of the phyllo, folding the triangle lightly. Brush the top with olive oil and set it on one of the baking sheets.

Continue making triangles with the remaining phyllo and filling.

(Or go with Katherine's tip. Just fold into pretty shapes, and don't worry about precision. It is cheese, it will taste good.)

Bake at 350 degrees for 12 minutes or until golden brown. Drizzle with honey and additional pecans and serve warm or room temperature.