What you need to know about Turkey's push into Syria 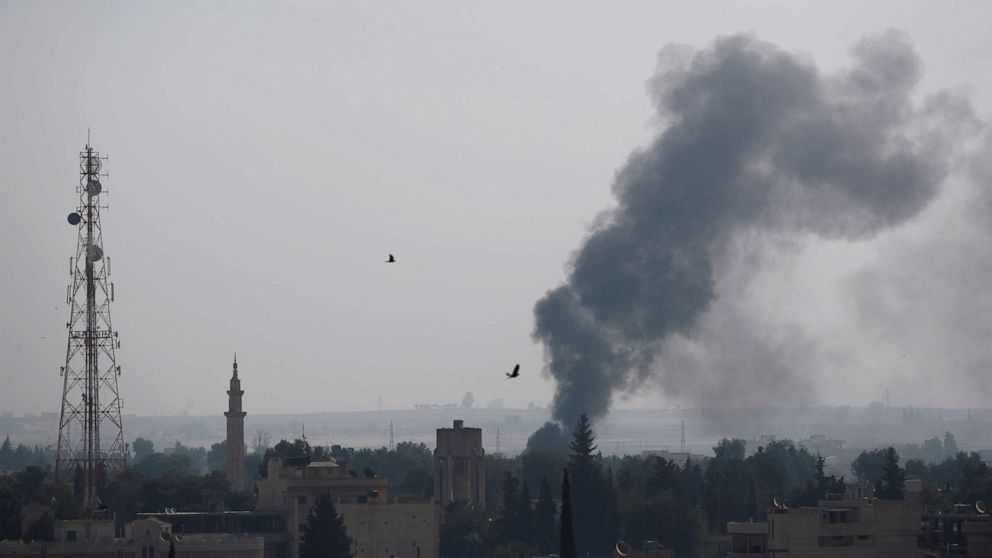 President Donald Trump has tasked the State Department with mediating a possible deal between Turkey and the Kurds, following a second day of Turkish airstrikes and artillery targeting America's Kurdish allies in northern Syria who helped defeat the Islamic State.

Speaking to reporters on the White House South Lawn on Thursday, the president said that he hoped the U.S. could mediate a deal, instead of deploying thousands of U.S. troops or sanctioning Turkey for its military action.

"We have been tasked by the president to try to see if there are areas of commonality between the two sides, if there's a way that we could find our way to a ceasefire," a senior State Department official said on Thursday. "And right now that's the work that we're doing but I can't describe it in any more detail."

The new policy comes only after the U.S. pulled out about 50 troops from the Turkey-Syria border after Turkish President Recep Tayyip Erdogan told Trump during a phone call on Sunday that their prior negotiated settlement in northern Syria wasn't working.

ABC News looks at what could result from Turkey's military operation against the Syrian Kurds.

What has Turkey done so far?

Turkish military aircraft have carried out airstrikes inside a 130-mile stretch of the border region, according to Syrian Kurdish forces known as the Syrian Democratic Forces. Local reports indicate about a dozen civilians have been killed in the offensive with dozens more seriously injured.

The U.S. is aware of Turkish airstrikes and artillery fire on several towns, including Tal Aryab and Ras al Ayn -- the two towns that are 75 miles apart and mark the "security mechanism zone" that had been agreed to by the United States and Turkey over the summer.

Inside the zone, the two nations had begun coordinated joint patrols that were designed to alleviate Turkey's concerns that elements of the Kurdish forces were a terror threat to the Turkish homeland. Erdogan also expressed a desire to resettle as many as 2 million Syrian refugees there.

Depending on the geography, that zone is between 3 and 7 miles from the border with Turkey. But Erdogan has publicly expressed a desire that the zone should be 18 miles deep inside Syria.

As part of that agreement, the SDF agreed to dismantle defensive fortifications along that stretch of the border. That action might now make it easier for Turkish forces to move deep into Syrian Kurdish areas.

A U.S. official told ABC News that there are close to 10,000 Turkish troops and pro-Turkish militia forces poised to enter the border area with Syria as part of what they are calling the "Peace Spring" operation.

Where are U.S. troops and what will they do?

There are still 1,000 U.S. military troops inside northeastern Syria at various locations, and there have been no orders given to them to leave Syria.

The only U.S. military forces that have been repositioned were the dozens of troops who had been stationed at two observation posts at Tal Aryab and Ras al Ayn, as part of the security mechanism agreement.

Defense Secretary Mark Esper and Gen. Mark Milley, the chairman of the Joint Chiefs of Staff, recommended the relocation of those troops right after Trump's call with Erdogan that indicated Turkey was moving forward with a military operation.

According to two U.S. officials there is no military coordination taking place with Turkey. The U.S. will defend its ground troops, if attacked, but there is no intent to shoot down Turkish military aircraft because that would presume Turkey is attacking U.S. targets.

It's unclear how deep into Syria the Turks are planning to go, but a U.S. official said there are a variety of plans for a possible, full U.S. military withdrawal from northeast Syria, should that become necessary.

According to a third U.S. official, there is active planning between the U.S., the coalition and Iraqi partners for how to respond to the Turkish military operation inside Syria, should it impact Iraq's security.

They are actively monitoring refugee camps and ISIS prisons inside of Syria, should any become insecure. Iraqi border guard forces are also on alert, but Iraqi security forces are not readying for combat, said the official.

It is unclear how much the SDF's fighters will be able to hold back a Turkish incursion. The SDF consists of 60,000 Syrian Kurd and Arab fighters who were able to defeat ISIS with the help of coalition airstrikes and U.S. military equipment.

But they will now be facing a Turkish military that -- at 640,000 -- is NATO's second-largest conventional force, equipped with hundreds of pieces of modern artillery, tanks and aircraft.

But he also expected that it would be a long, drawn-out battle because he expected all of his fighters to offer a stiff resistance to the Turkish incursion. That would include the Kurdish guards working at the prisons that are holding the more than 12,000 ISIS fighters who were captured on the battlefield.

They "are going to head to the border area to defend their families" against a potential Turkish assault, Ebdi told ABC News.

"This lack in security, of course, is going to jeopardize the calm in the prisons," he said.

The senior State Department official said on Thursday that Kurdish forces were still in control of all ISIS prisons, the majority of which are farther away from the border. That official wouldn't comment on how many, if any, Kurdish troops had been pulled off prison security, citing military intelligence. But according to another official, some Kurdish guards have left their prison posts.