Woman followed from bank before car window punched out and purse taken at stoplight, HPD says 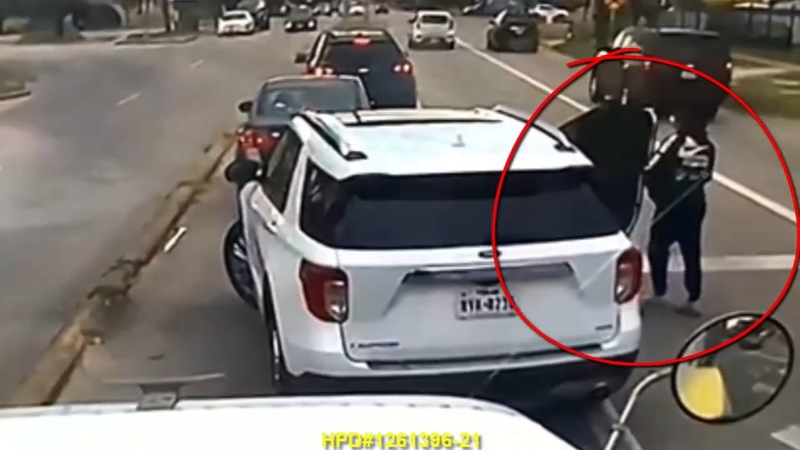 Woman stopped at intersection robbed when man punches her window

HOUSTON, Texas (KTRK) -- Four months after what police call a "brazen jugging" at a southeast Houston stoplight, police are renewing a call to the public to help find the robber who was seen punching a woman's car window and then taking her purse.

On Thursday, Houston Police Robbery Division released surveillance video of the crime that took place at about 2:15 p.m. on Saturday, Sept. 18, 2021, at an intersection in the 1800 block of Broadway Street.

According to police, the victim told investigators that while stopped, a man suddenly appeared by her passenger door, punched the window while wearing gloves, caused the window to break, and then reached into her vehicle and grabbed her purse.

Then, the man is seen on surveillance video getting into the passenger seat of what police described as a newer model Ford Explorer, which then made a U-turn and drove off.

Another key component to the robbery was where the victim said she was before the smash-and-grab heist took place.

Take a good look at the video above! HPD said the suspect(s) drove near the victim's car, parked by the front of the bank and waited for her. Once she was leaving, they followed her to her car, broke her car window and ran off with her purse.

According to HPD, the woman told them she was at a bank withdrawing money in the 1100 block of Southmore. Police said she noticed the same vehicle in the parking lot and believes that the suspects followed her from there.

Since the robbery, detectives were able to establish the Ford's license plate as "NVM0236," but they have not been able to identify the vehicle's whereabouts or the people behind the crime.

Police described the robber seen on video as a Black male, about 20 years old, 5 feet 7 inches to 5 feet 8 inches, and 150 to 170 pounds. He was last seen wearing black clothing.

Police urge anyone with information on the vehicle or suspects involved to contact Crime Stoppers of Houston by calling 713-222-TIPS (8477). Tips can also be submitted online at the Crime Stoppers website and through their mobile app.

As a reminder, tips to Crime Stoppers can be submitted anonymously, and any tip that results in charges and/or arrests may earn you up to $5,000.