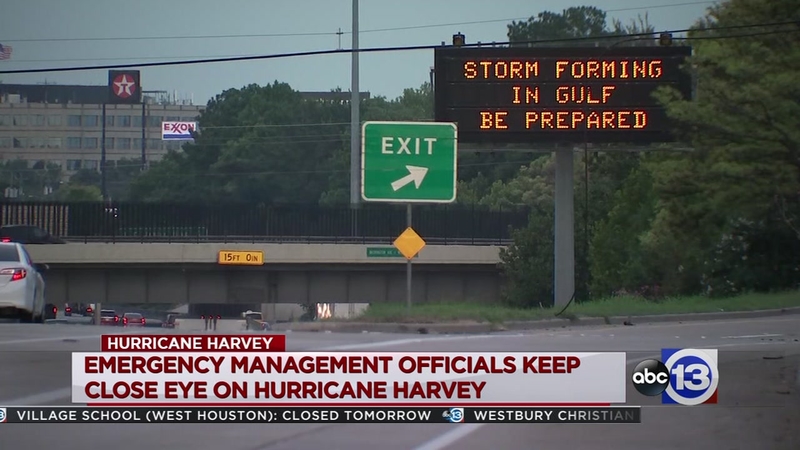 Steven Romo reports on Houstonions preparing for the storm

HOUSTON, Texas (KTRK) -- It's been a while since Houston has been on high alert for a hurricane, and many are asking if they should head out of town before Harvey makes landfall.

"Evacuations for hurricanes happen a few days before. We're not anticipating those evacuations," Michael Walter with the Office of Emergency Management said.

However, officials emphasize the importance of acting now to prepare for possible flooding, power outages and interruptions in clean water service.

Walter said there are contingency plans for emergency food and water distribution, but only in catastrophic conditions and only as life preservation measures. Meaning, it's a good idea to fill a bathtub with water along with collecting a few days worth of drinking water and food.

"Get as many supplies as you can for 5-7 days. We're looking at a prolonged rainfall event with very strong winds," Walter said.

While some people are feeling overwhelmed, others who have been through this before are trying to focus on the facts.

"We were here for Ike and that was I think stronger," Flavio Jimenez said.

Jimenez and Dinora Trevino have visitors from out of town this weekend. They're keeping everyone calm and making the best of it.

"According to what I saw at the store, people are getting ready for a storm or hurricane," Trevino said.

They're also hoping the city and its people have learned a lot since last time.

"We have a lot of great information, resources that have come online since the last hurricane we had. We have much better forecasting than we did we had in 2008," Walter said. "One of the things that makes Houston really strong is its diversity, its resilience and its communities. Help your community. Connect with your neighbors. [They're] a major resource."