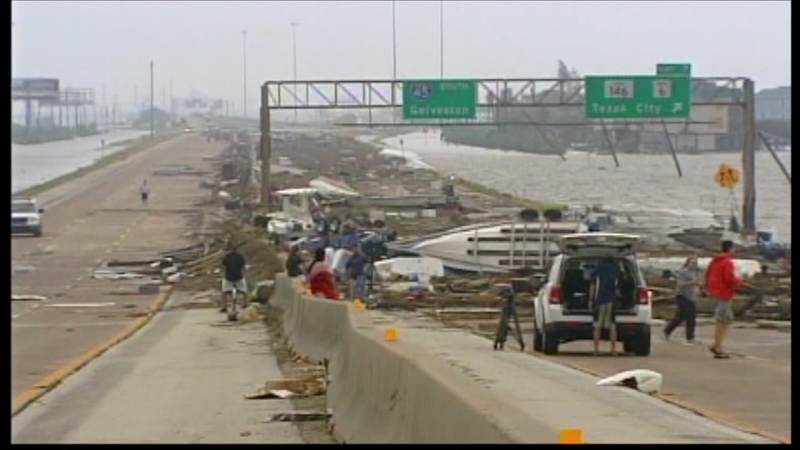 HOUSTON, Texas (KTRK) -- As Texas keeps a close eye on the tropical disturbance in the Gulf and Hurricane Florence arrives in the Carolinas, we're also remembering Hurricane Ike.

RELATED: A look back at Hurricane Ike 10 years later

"Woke up about four in the morning, went outside and as you said, saw the flooding and it hadn't rained yet," Will Wright, Chief Creative Officer of the Galveston Historical Foundation, said.

Wright had planned to ride out the storm, but that changed on the morning before landfall.

"Made the decision to leave that morning and was really glad I did. I sure did not want to be someone who was stuck, putting someone else in jeopardy to try to help me," Wright recalled.

Ten years later, many of the homes and businesses on Galveston Island have been elevated to protect them from rising water.

The storm did not wipe out the island, but it caused billions of dollars in damage.

"Had about 12 feet of water where I lived, lost everything, which was very common for everyone who lived in that area," Wright said.

Ten years ago today Hurricane #Ike sent a massive storm surge tide into Galveston and Trinity Bays. This is all that remained of KC Duff's home in the devastated community of #OakIsland, TX.https://t.co/utEQ3GK5MT pic.twitter.com/VnTEjCkGLd

Now another storm is brewing in the Gulf. It has a 50 percent chance of forming into a tropical depression before moving over Texas Friday. So far, there are no plans to activate the Galveston County Office of Emergency Management.

"They are going to fly the system later this afternoon to see if they can find a center, but to be quite honest for us in this area, the impacts are going to be the same and that is just some periods of heavy rainfall," said Molly Merrifield with the National Weather Service.

An open tweet to coastal residents of the Carolinas:

10 years ago today, we took a hit from category 2 #Ike. Like #Florence, it was a large hurricane with peak winds of 110 mph. These before/after photos show what the 15-20' storm surge did to our coast.https://t.co/B0byHwOxsO pic.twitter.com/6yEPs1gI0F

A Flash Flood Watch is in effect for the coastal counties until 7 p.m. Thursday.