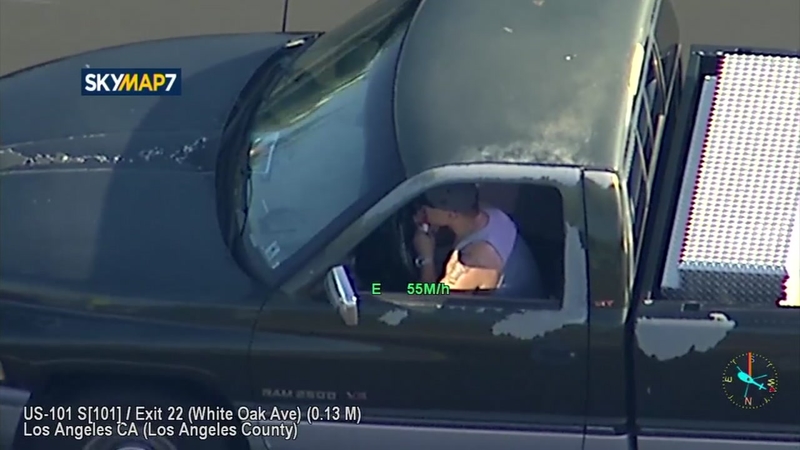 LOS ANGELES, California -- Los Angeles police chased a double murder suspect in a dark green pickup truck through the San Fernando Valley into Santa Monica before the two men inside the vehicle surrendered in Brentwood Wednesday.

The long pursuit began in the Woodland Hills area near Winnetka Avenue and Victory Boulevard around 5 p.m. amid rush-hour traffic. Authorities said the chase resulted after they tried to serve a warrant to one of the men in the vehicle related to a homicide investigation.

During the chase, the driver could be seen through the truck's window in a white tank top and ball cap as he swerved through heavy traffic on the 101 Freeway and then transitioned onto surface streets before entering the 405 Freeway, speeding down southbound lanes.

The truck narrowly missed several cars as police units gave chase. At one point, the driver could be seen taking a puff from an asthma inhaler as he continued to lead authorities toward the west side of the valley at dangerously high speeds. At least eight LAPD units were in pursuit.

Authorities believed that the murder suspect, who was thought to be sitting in the passenger's seat of the truck, could be armed and dangerous.

Authorities identified the suspect as Gregorio Garcia, 39. He is suspected of killing two men on Feb. 10 in the 500 block of South Rampart Boulevard. According to the coroner's office, Nicholas Michael Parsons, 40, was shot in the chest and Fernando Medina, 25, was shot in the torso.

After the suspects sped down the 405 Freeway, the driver exited onto surface streets in Santa Monica, making rapid turns and circling the area as he approached Venice, then heading into the Brentwood area.

This was scene at Ralphs supermarket in Brentwood when pursuit of double homicide suspect ended in parking lot. The man in this video is NOT the murder suspect, but rather the driver of truck arrested on felony evading. All 3 suspects involved in pursuit are in custody @ABC7 pic.twitter.com/8wRSjc6RkS

The driver pulled into the parking lot of a Ralph's grocery store and got out of the pickup truck with his hands raised. As authorities took him into custody, the passenger exited the vehicle and was also arrested.

Police later said a third suspect was involved in the chase and had exited the vehicle at some point during the beginning of the chase. That person was also arrested.