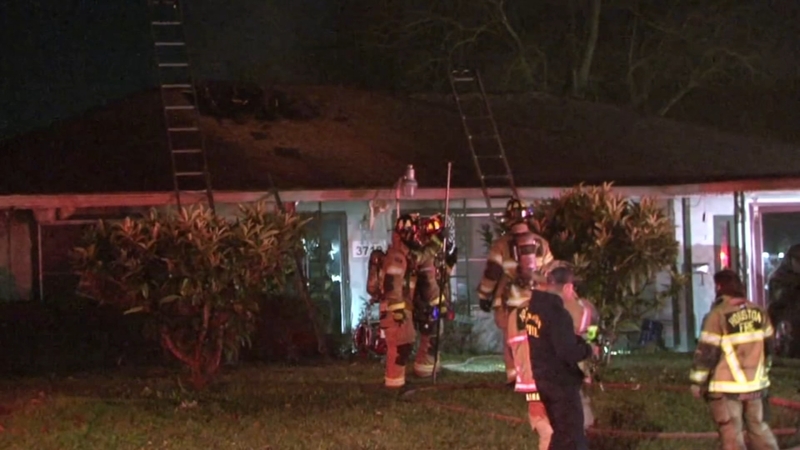 HOUSTON, Texas (KTRK) -- A person of interest has been questioned by authorities after a deadly house fire on Houston's southeast side.

Police said that man was at the home on Ward Street when the fire happened just after 3 a.m. Tuesday.

Family members of the victim identified him as 63-year-old Anthony Robinson. They told ABC13 that Robinson had been sick recently but was supposed to go back to work on Tuesday, something he was really looking forward to doing.

Longtime friends and neighbors said Robinson lived alone in his childhood home, until recently, when he decided to get a roommate.

Sue Cormier, a longtime friend of Robinson, said the pair had problems, and Robinson tried to evict the man from his house.

"He was trying to evict him. He had been having problems out of him for days," says Cormier. "The police came several times, and he literally told the police he was gonna kill him. He told them that (Monday)."

Robinson's cousin, Nettie Jackson, said he was someone who would help those in need. In fact, Robinson was helping the person staying at the house as a roommate.

"He was telling me that the guy was there just to help him out. He was just helping him out for a little while, and that was it!" said Jackson.

Now, that roommate is a person of interest in the fatal fire.

One person taken to the hospital after a house fire on Ward Street #abc13 pic.twitter.com/g1Zxjj4Pld

When HFD arrived at the fire, crews found the home was filled with smoke and immediately started checking rooms.

Major update:
HPD says a person of interest is in custody after a suspicious fire on Ward. Homeowner is dead, person of interest was his roommate who the home owner was trying to evict. Homicide Investigators are en route #abc13 pic.twitter.com/a7HQsqu8OC

Robinson was found in a back room. CPR was started and he was taken to the hospital, where he later died due to his injuries.

Robinson's cousin said the family is shocked by what happened.

"He was a very, very nice person, carefree person. And he had been living in that house, that's his family home, that he lived in," Jackson said. "He was just a jolly person. He would give you his last. If you knew him, even if he was sad, you wouldn't know it. That's the type of person that Anthony was."