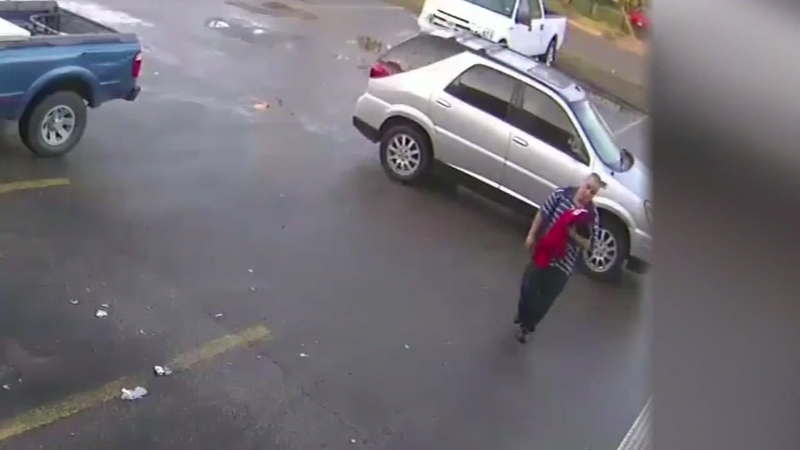 HOUSTON (KTRK) -- Houston Police are hoping surveillance video will lead to the arrest of man accused of carjacking a family in southeast Houston on December 4th.

A mother of three said she was getting breakfast at Snowflake Donuts when a man approached her.

"He had his gun right at my belly saying, 'Give me your keys, give me your purse.' I'm just praying that he's not kidnapping me," the victim said.

She said the man took her car and forced her in the passenger seat. Her children, ages 4, 6, and 8, were all in the back.

"I started panicking. That's when he was like, 'Sorry I put you into this, you know, I got screwed over with Harvey. Nobody wanted to help me,'" she said.

She gave him her purse, wedding ring, and all the money she had, but he kept driving until he lost control and crashed into a house.

"After he hit the house, I turned around and looked at my son and I saw him crying and he was laying down. I started panicking and I yelled at him and I was like, 'Take me to the hospital, call 911,' because that was like the most scariest moment to see my son with bruises coming out of his face and there was blood gushing out of his head. I thought he was going to die."

Police say the man shot up in the air, then started approaching drivers, asking them to give him a ride. Somebody finally took him down the block.

"All I could remember was just saying, 'Help me, help me,' and then I just put pressure on his forehead, praying to God nothing would happen to my son," she said.

Her son spent the night in the hospital, but is now recovering.

She worries the man could come back for the family.

The suspect is described as a Hispanic male, 26 to 34 years old, standing at 5 feet 7 to 5 feet 8, weighing 180 to 200 pounds. He was seen wearing a blue and white striped polo, black shoes and black cap.

Crime Stoppers may pay up to $5,000 for information leading to the charging and/or arrest of the suspect in this case. Anonymous tips may be reported by calling 713-222-TIPS or submitted online at www.crime-stoppers.org.