By ALEXA URA, The Texas Tribune 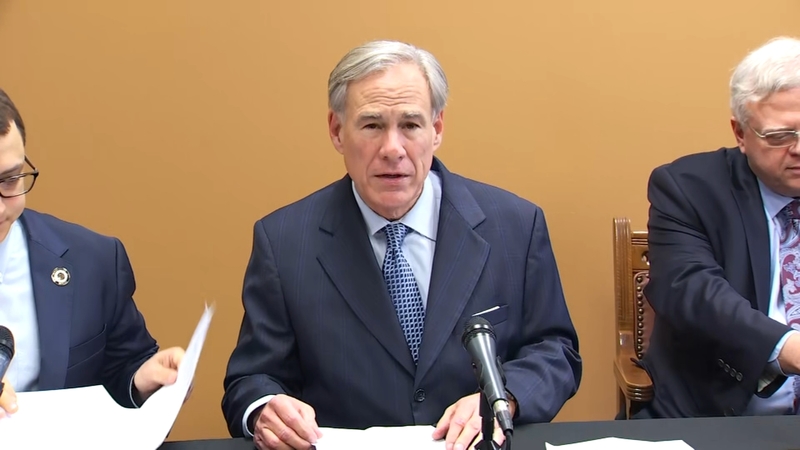 HOUSTON, Texas -- Joining a nationwide movement by Republicans to enact new restrictions on voting, Gov. Greg Abbott indicated Monday he will back legislation to outlaw election measures like those used in Harris County during the 2020 election aimed at expanding safe access to the ballot box during the coronavirus pandemic.

At a press conference in Houston, Abbott served up the opening salvo in the Texas GOP's legislative response to the 2020 election and its push to further restrict voting by taking aim at local election officials in the state's most populous and Democratically controlled county. The governor specifically criticized officials in Harris County for attempting to send applications to vote by mail to every registered voter and their bid to set up widespread drive-thru voting, teeing up his support for legislation that would prohibit both initiatives in future elections.

Harris County officials quickly fired back at Republicans' proposals in their own press conference.

"These kinds of attempts to confuse, to intimidate, to suppress are a continuation of policies we've seen in this state since Reconstruction," Harris County Judge Lina Hidalgo said. "It is a continuation as well of the big lie that's being peddled by some far-right elements that the election in 2020 was somehow not true and should be overturned."

In the video, Harris County Judge Lina Hidalgo hits back at Gov. Greg Abbott's push on voting integrity bills, insisting they would do more to suppress the rights of voters.

Texas already has some of the strictest voting rules in the country. Some restrictions being proposed in other states are aimed at voting rules that aren't allowed in Texas, including no excuse voting by mail and automatic voter registration.

But Texas lawmakers are looking to further tighten the state's rules with a particular focus on measures put in place by local officials to widen access for voters. Restrictions proposed by Texas Republicans this year include prohibiting counties from sending out mail-in applications unless they're requested by a voter, barring drive-thru voting that allows more voters to cast ballots from their cars and halting extended early voting hours.

Other counties, including Hidalgo County on the border, sent applications to request a mail-in ballot to voters 65 and older who automatically qualify to vote by mail under the state's tight eligibility rules. But Texas Republicans' ire fell on Harris County when it moved to send applications to all 2.4 million registered voters in the county with instructions on how to determine if they were eligible for mail-in voting. The Texas Supreme Court ultimately blocked that effort.

The county also fought back against Republican efforts to toss out nearly 127,000 votes cast during early voting at the county's 10 drive-thru polling places. State and federal courts rejected Republicans' broader efforts to challenge the validity of the novel voting mechanism, though the county ultimately shuttered nine of those locations on Election Day because of continued legal challenges. Ten percent of Harris County's in-person early voters cast their ballots at the county's drive-thru locations.

In the aftermath of the 2020 election, the Trump campaign and other Republicans worked to challenge the results, baselessly claiming that widespread fraud swayed the outcome in swing states. But those arguments fell apart in the federal courts. Election officials and even former U.S. Attorney General Bill Barr also said there was no evidence to back Republican claims.

State Rep. Briscoe Cain, R-Deer Park, who chairs the House Election Committee and appeared with Abbott on Monday, aided the Trump campaign's work in Pennsylvania where the campaign eventually filed a lawsuit alleging widespread issues with mail-in ballots. A federal judge threw out the lawsuit, finding the former president's team provided "strained legal arguments without merit and speculative accusations" that were not supported by evidence.

Beyond prohibiting Harris County's initiatives, the legislation among Patrick's priorities, Senate Bill 7, would also require voters seeking to vote by mail based on a disability to provide written documentation from the Social Security Administration or a doctor to support their eligibility.

People in Harris County are voting in record numbers, and officials aren't taking any risks. How was this task force assembled and what exactly are they doing to keep your voting experience safe? ABC13's Tom Abrahams explains.

On Monday, Abbott aligned the legislative pushback on Harris County with his emergency item by arguing "the integrity of elections in 2020 were questioned" by the county's actions and invoking his concerns about fraud in the broader electoral system in the state.

Though there are documented cases of fraud in Texas, it remains rare and there is no evidence that it is widespread.

During his remarks, Abbott noted that the outcome of local elections in the past had been "altered by election fraud." His office did not immediately provide specifics about which elections he meant. But Abbott conceded he was unaware whether that had been the case last year.

"Right now I don't know how many or if any elections in the state of Texas in 2020 were altered because of voter fraud," Abbott said. "What I can tell you is this, and that is any voter fraud that takes place sow seeds of distrust in the election process."
Report a correction or typo
Related topics:
politicshoustontexas politicsvotingtexas newsgreg abbottelectiontexas tribunefraudsecurity
TEXAS TRIBUNE
2 TX Democrats unaccounted for in D.C. reportedly on European vacation
TX gas producers contribute millions to Gov. Abbott campaign
Judge blocks Abbott's order to pull over vehicles with migrants
Texas Legislature still at impasse on elections bill as time runs out
TOP STORIES
Sheriff's office releases bodycam video of arrest that went viral
11 killed, 13 injured when van crashed into pole near border, DPS says
Dickinson councilman dies days after testing positive for COVID-19
Astros fan describes 'rude, nasty' atmosphere in Dodger Stadium
Moody Gardens' Palm Beach closed due to COVID-19 spread
Scattered downpours possible Thursday and Friday
7-year-old shot in the eye in SW Houston, police say
Show More
Houston's post-pandemic economy slowly creeping back
How this green RV can help recent grads find a life-changing career
Land 1 of 100s jobs in Lake Conroe during ABC13's virtual job fair
Houston reveals 'super' push to get students vaccinated
3-year-old girl rushed to hospital after being found in pool
More TOP STORIES News