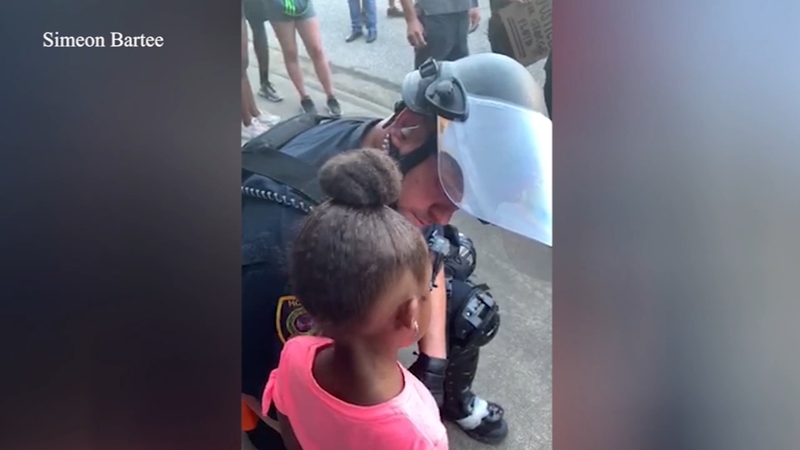 The 5-year-old is seen asking an officer if he was going to shoot at them, during the march in downtown Houston.

Simeon Bartee said he and his wife, Sion Bartee, decided that they would take their 5-year-old daughter with them to attend the historic march for justice in honor of Houston-native George Floyd.

"I can get emotional just talking about it. It's sad that you have to think that way, explaining it to a 5-year-old. That it even has to be a conversation," Bartee said. "We have a history of police brutality in my family too, so we were just going to go out there to raise awareness. I wanted to teach her at a young age to have a voice."

The Bartee family traveled down from Tomball to be at the march, during which Simeon said his 5-year-old daughter Simone started getting emotional and crying, and approached a Houston police officer.

"That's when she asked him, 'Why do you have on this outfit? Are you going to shoot us, like what's going on?"

The officer's response, Bartee said was a moment their family will always remember.

"I was so in the moment, that I wish that I would have caught the very beginning of it, because that's when he spoke about him having a daughter himself and wanting to make it home to his daughter," Bartee said. "You could tell it came from a very genuine place."

The video has been viewed nearly 3 million times on social media.

As protests continue around the country in the name of George Floyd, Ahmaud Arbery, and Breonna Taylor, the Bartee family has just one message for the community and the Houston police officer.

"It's going to start with us being compassionate on both sides. Right now, I think the world is relearning equality and I think this moment here and the moment we captured here on this video was a beautiful start to let us know because it came out of the mouth of a child," Bartee said. "I think that the first word is listening and then the second word is just loving."

"I would just like to tell him thank you, thank you for giving me a new perspective," Bartee said.

The Bartee family also plans to attend the public memorial for George Floyd next Tuesday.