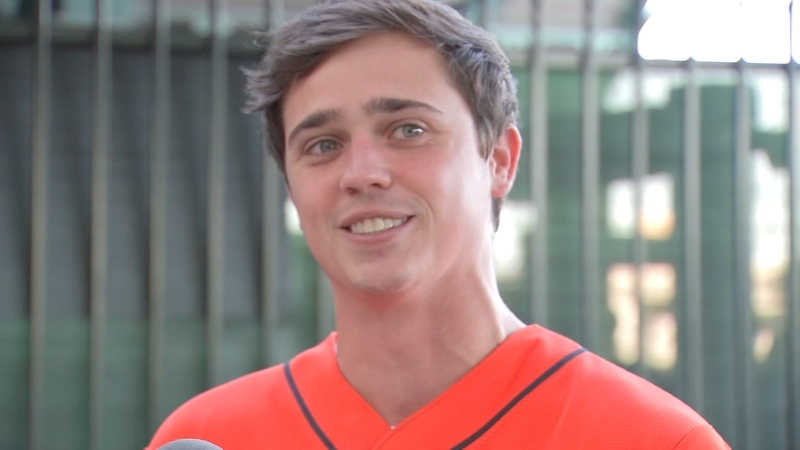 An Astros fan that the cameras couldn't get enough of in New York found himself at the World Series after his passion caught a player's attention.

Forrest Magee's over-the-top emotions were a gift to social media during Game 4 of the American League Championship Series. Days later, the attention hasn't stopped as the nervous fan found himself at game one of the World Series.

"I don't really know why I'm so famous, or whatever right now, or my five minutes of fame because I was basically just watching a baseball game," Magee said.

NERVOUS FAN RETURNS: The 🎥 loved this #Astros fan in New York. Tonight, he was back cheering on the @astros thanks to @LMcCullers43, who hooked him up with a pair of tickets. Watch the story here: #TakeItBack https://t.co/9qhWpU2KKS pic.twitter.com/dkW9DbU6TV

The new-found fame landed Magee an offer he couldn't resist. "First, I thought it was kind of like a prank," Magee recalled.

ORIGINAL STORY: We know who he is! Meet 'Nervously Excited Astros Fan'

"I can't even describe how awesome this is," Magee explained. "This is the most unbelievable thing ever!"

"I thought it would be nice to take him and just a good moment to have for both of us together," Magee said.

It was a memorable moment the nervous fan in the Bronx never saw coming.

However, you may not have seen him on TV Tuesday night. After all, his orange didn't stick out as much as it did in New York. But that doesn't mean his emotion was any different.

"Honestly, that's me," Magee explained. "Maybe not that much during regular season games. I watch probably 100 games during the year, and I get pretty animated during those games."

But that over-the-top love for the Astros is worth it. It landed Magee a trip to the World Series.

After facing off twice in the ALCS in the past 3 years, the Astros and Yankees are pretty familiar with each other. But what about their fans?