We know who he is! Meet 'Nervously Excited Astros Fan' 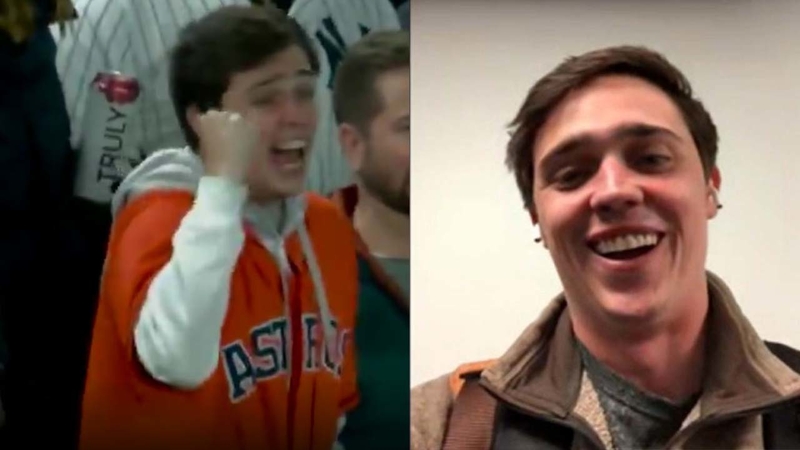 We know who he is! Meet 'Nervously Excited Astros Fan'

Forrest Magee is a native Houstonian and a long-time Astros fan, and now, his reaction to a play during Game 4 of the ALCS has gone viral.

When I come home from covering the #alcs for 7 days and the hubs has vacuumed, done the dishes, grocery shopped. #astros #takeitback https://t.co/nKRERBK2ri pic.twitter.com/CdPSZuHWKJ

"It's been surreal," said Magee during a Facetime interview with ABC13. "To me, I was just watching a baseball game, supporting our guys."

READ MORE: Houston Astros one win away from World Series after 8-3 Game 4 win

He said due to the rain delay, a group of his friends and fellow Astros fans had to sell their tickets and fly back to Houston, leaving Magee surrounded by a sea of Yankees fans.

"It got a little rowdy," said Magee.

After Zach Greinke walked in a run, Magee's face told the entire story and his face immediately went viral.

Although, he didn't know that until the game ended when he turned his phone back on.

"It got a little out of hand," said Magee.

He said as he was walking out of the bathroom during the seventh inning, an Astros fan asked to take a picture with him after seeing Magee's face all over social media.

"(He said) 'You're just a very enthusiastic fan and I just want a picture with you,'" said Magee.

After facing off twice in the ALCS in the past 3 years, the Astros and Yankees are pretty familiar with each other. But what about their fans?

Although he says he's a bit overwhelmed by the attention, he says he wouldn't change the experience for anything.

It's also getting him some serious perks!

He said Astros pitcher Lance McCullers reached out to him on Twitter and said, "If we make the World Series, just pick a game and I'll get you a ticket."

In the end, the excited fan says he's simply hoping the Astros wrap up the series in New York Friday night.