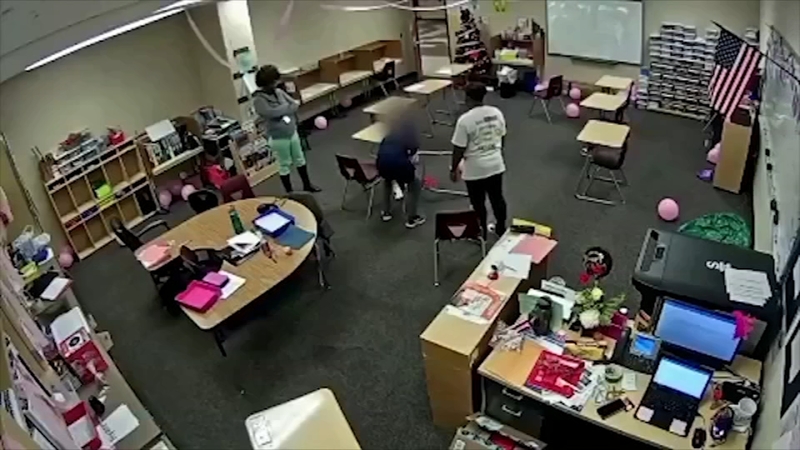 HOUSTON, Texas (KTRK) -- The Lamar Consolidated ISD teacher accused of mistreating a child with special needs is speaking out.

In a statement from her lawyer, Regina Thurston said the techniques she use are based on "student's individual needs and on a specific discipline management theory."

The response comes days after a video of her grabbing the child's arm was released to the public.

"A video of former Lamar Consolidated ISD teacher ReGina Thurston's classroom caught the media's attention this week. The school district previously responded to the incident captured on the video.
According to school law attorney Susan Soto, who represents Mrs. Thurston, allegations that the teacher was abusive to the student are untrue.

Soto says that while the video may be disturbing to some, the techniques that Mrs. Thurston employed are based on the student's individual needs and on a specific discipline management theory.
Over the course of the school year, Mrs. Thurston attempted a variety of discipline management strategies with the student in order to minimize a pattern of dangerous behavior. The video depicts an Applied Behavior Analysis strategy that focuses on improving specific behaviors. The strategy, called Response Cost, decreases undesired behaviors by assigning a penalty or cost to them. When a student learns to acquire individual attention by throwing items and overturning furniture in a classroom, a teacher may try to decrease throwing episodes by displacing additional items on the floor for the student to collect. The additional clean-up the student must perform is the penalty or cost for the inappropriate behavior.

The teacher's behavior was intended to correct a problem, but it has been taken out of context and sensationalized. Only the full video is a fair representation of what occurred in the classroom that day, and neither the student's parents nor their lawyer have provided the public with full information. The student had a good relationship with Mrs. Thurston and, in fact, hugs Mrs. Thurston with affection in a portion of the video that was withheld.

Soto said, "I am grateful that the public has expressed concern about the student. The civility of our society is gauged by the degree to which we speak up for those who cannot speak for themselves. However, accurate and complete information, as well as an understanding of behavior management are relevant and necessary here, in order to accurately assess what happened on the day in question. If the community is going to form an opinion about Mrs. Thurston based on a few seconds of carefully-selected classroom video meant to stir emotions and elicit social media posts, then it is only right to acknowledge that there is more to the story."

Soto is a former public school teacher and principal and represents Texas teachers, students, and their parents in school law matters across the state. She said that while cameras are generally placed in special education classrooms to protect students, they often exonerate teachers who have done nothing wrong. "Texas has thousands of great teachers who do the best they can for students every day. When a parent makes accusations against a teacher, video evidence can be very useful to gain information and eventually clear the teacher's name," Soto said."

In the video, the George Ranch High School teacher was seen knocking over the student's desk and then forcing him to pick it up.

The child's parents released the video over the weekend in hopes of bringing awareness of how special needs children are being treated in classrooms.