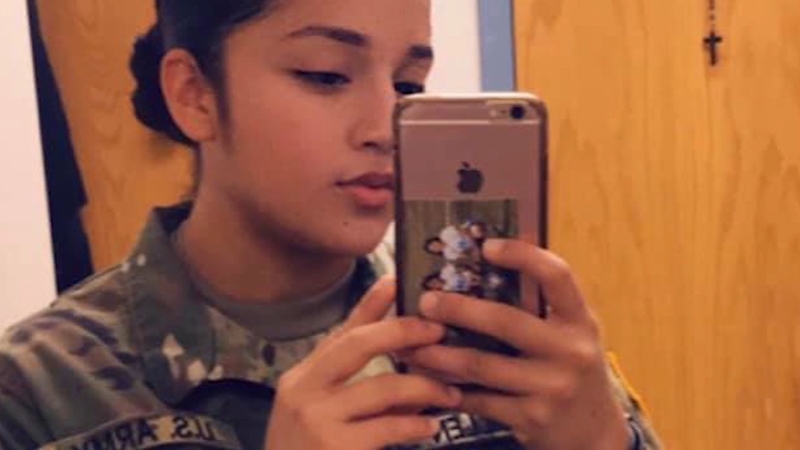 The family of Army soldier Vanessa Guillen has called for a Congressional investigation into her disappearance, as they ask for justice. Now the League of United Latin American Citizens, or LULAC, is adding their voice to the message that the military is not doing enough to protect enlisted women.

Guillen, from Houston, was a 20-year-old Fort Hood soldier who disappeared in April. This week, human remains that her family believes to be Vanessa were found near the Leon River in Bell County. The remains were found in what has been described as a shallow grave.

At a press conference Wednesday, Guillen family attorney Natalie Khawam made the connection while blasting the U.S. Army for its handling of the case.
EMBED More News Videos

ENOUGH IS ENOUGH: Hit play to hear what the family of Army soldier Vanessa Guillen said about a person of interest who committed suicide and how that may be tied to Guillen's sexual harassment allegations.

"We lost a life. We lost a beautiful young soldier," Khawam said. "Enough is enough."

Guillen reported that she was the victim of sexual harassment prior to her disappearance.

Vanessa's younger sister, Lupe accused the Army of covering up the case as the search continued.

"They lied to our faces every single day," Lupe Guillen said. "How can this happen on a military base while she was on duty?"

Lupe Guillen fought back tears on Wednesday as she talked about her sister Vanessa, who disappeared while serving on base at Fort Hood

"There's cameras everywhere, so it's really impossible for her to disappear there from the largest military base in the United States without anyone knowing or finding out," said Domingo Garcia, the national president of the League of United Latin American Citizens, or LULAC.

Garcia says the military dragged its feet at the beginning of the investigation, losing precious time.

"The Army has a saying: We leave nobody behind. We can't leave Vanessa behind or any other women who serves this country," said Garcia.

Garcia says since Guillen's disappearance and allegations of sexual harassment, other Latina soldiers have come forward to say they have been victims of sexual misconduct.

"We are asking all women especially Latina women or their families: Do not enlist in the army until we have assurance they will be protected and taken care of when they serve our country. And right now I just don't believe the military is capable of doing that because of what happened to Vanessa Guillen," said Garcia.

Aaron David Robinson, a 20-year-old Army Specialist, was identified as a suspect in the case. Robinson died by suicide when authorities made contact with him on Wednesday, according to special agent Damon Phelps with the Army's Criminal Investigation Command.

Guillen's sister Mayra said she met with Robinson while trying to find her sister.

"I met him not knowing that he had something to do with it," Mayra Guillen said. "I felt something was telling me that he did something and I wasn't wrong apparently. He still had the nerve that day to laugh in my face. And apparently now, he kills himself. Why? I don't know. But whoever is responsible has to pay and we demand a Congressional investigation."

Guillen grew up in southeast Houston and graduated from Cesar Chavez High School. She was last seen on April 22 at 1 p.m. in the parking lot of her Regimental Engineer Squadron Headquarters, 3rd Cavalry Regiment.

Khawam said she's discovered at least two alleged incidents of sexual harassment -- a superior walking in on Guillen showering and another verbally assaulting her with vulgar remarks in Spanish. She says the person who died by suicide was the superior in the shower incident.

Khawam said Guillen told loved ones she didn't want to report the sexual harassment out of fear of retaliation.

The Army's Criminal Investigation Command launched an investigation into allegations that Guillen was sexually harassed.

"I opened an investigation concerning the information provided by the Guillen Family that Pfc. Vanessa Guillen was harassed prior to her disappearance," said Commander of the 3rd Cavalry Regiment Col. Ralph Overland. "I take allegations of sexual harassment very seriously and we are conducting a thorough investigation."

But on Thursday Fort Hood officials pushed back on those allegations.