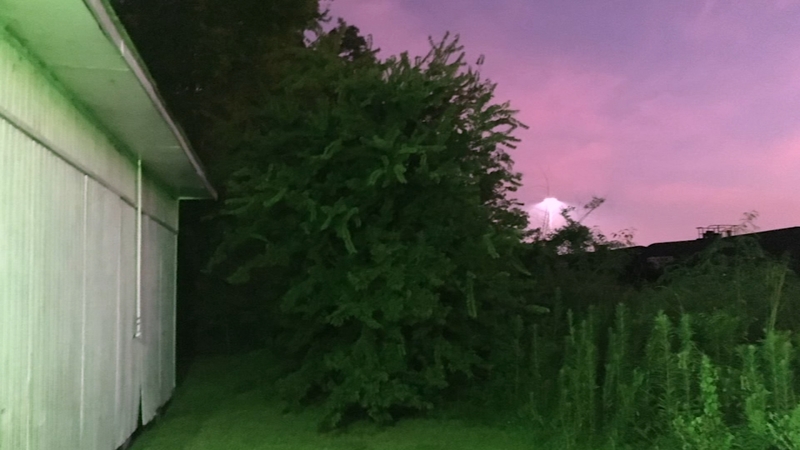 HOUSTON, Texas (KTRK) -- On Houston's northeast side, tall grass and wild trees were threatening to overshadow the worship inside the Grace Assembly Kingdom House of Prayer, a small but proud church that sits right next to Union Pacific's Settegast Yard.

Pastor Evangeline Hewitt told Ted Oberg, "It was like a forest."

The overgrowth belonged to her neighbor, the Union Pacific railroad.

It was all that stood between her and the company's rail yard. The photos she took show the locomotives are nearly lost behind the growth.

"I have grandbabies that run outside," Pastor Hewitt said. "I can't afford to have them (out there next to the tall grass), you know, it's just, it's ridiculous."

Hewitt says she called Union Pacific and conducted research online, trying to get their attention.

But the trees and tall grass continued growing higher until she called the Turn to Ted team.

"The only person (that) called me back was you," Hewitt told ABC13's Ted Oberg. "One thing I know about you, you'll get the job done. You will know. If you don't know, you will find out who we need to contact, what we need to do to get the job done."

Days after we called the railroad, their team stepped in to clear the weeds and trees.

Pastor Hewitt says it took them five hours to get rid of it all.

Union Pacific hired a crew the day after we called to ask about the issue. The crew told Pastor Hewitt they will be back to put down a weed block; she is thankful for that.

Have a tip for Ted Oberg? A problem to solve? Get in touch with us on our tip page, or send a tip below. (On mobile? You can open our form by tapping here.)
Related topics:
societyhoustonchurchturn to ted
Copyright © 2022 KTRK-TV. All Rights Reserved.
TURN TO TED
No mailbox fix from USPS until neighborhood Turns to Ted
Turn to Ted helps man get his $6,000 on motorcycle sale
Houston woman Turns to Ted after new shirts were damaged
Veteran Turns to Ted after HOA won't approve disability accommodation
TOP STORIES
No bond granted for suspect in Pct. 5 corporal ambush killing
Bodies found in back seat and trunk of burning vehicle in Liberty Co.
Attorney of man questioned in dad's death wants him to seek help
Houston greenlights plan to help homeless find housing
EPA announces cleanup plans to address Fifth Ward cancer cluster
Investigation underway in pregnant woman shooting
Search underway for suspect in Texas City double shooting
Show More
New Buffalo Speedway bridge opens over Brays Bayou
ABC13 sits down with 3 of 5 Democrats looking to unseat AG Ken Paxton
You could get paid to get your COVID vaccine or booster
Man who sold weapon to Colleyville synagogue standoff suspect charged
C. Baldwin Hotel announces downtown watch party for The Bachelor
More TOP STORIES News