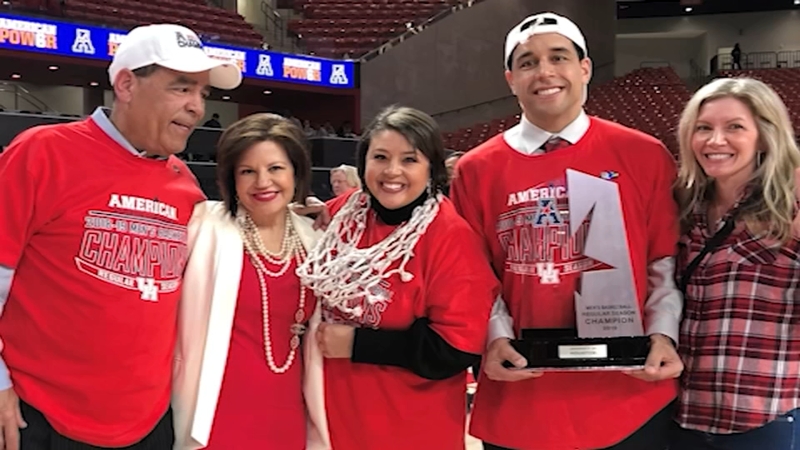 HOUSTON, Texas (KTRK) -- One of the enduring images of the University of Houston's run to the NCAA men's Final Four took place following the team's win over the Oregon State Beavers in the Elite Eight.

After the game, Kelvin, Kellen, and Lauren Sampson shared a long embrace on the court.

Kelvin is the head coach, his son, Kellen, is an assistant coach (and the team's "coach-in-waiting"), and his daughter, Lauren, works in the front office as the team's director for external operations. The family has always been close, and this was yet another monumental moment in the Sampson basketball legacy.

"My dad is a coach's kid, as well," said Lauren. "He grew up so engrained with the team and the program."

Lauren and Kellen have had similar experiences with their father. They've both spent time doing jobs away from their father, but knew their dad's opportunity at UH presented a possible last-chance scenario.

"This was an opportunity we didn't think we'd have again," she said. "The opportunity was too good to pass up."

Kellen's "coach-in-waiting" title means he'll be the men's basketball coach at the University of Houston when his dad decides to retire. As far as Lauren's job goes, she said she has a hand in "anything the fans see," which includes publicity and other aspects of day-to-day operations.

When Kelvin started coaching the Cougars, he had to walk around campus and ask students if they'd come to the games - that was Lauren's idea. In the end, it all worked out, as fans came, the school built new facilities, and the team is just two wins away from their first title.

That success might be a surprise to people who haven't been watching the team, but Lauren said she's hardly surprised by the school's success.

"It was inevitable," said Lauren. "I know what he's able to do because I've had a front-row seat my whole life."