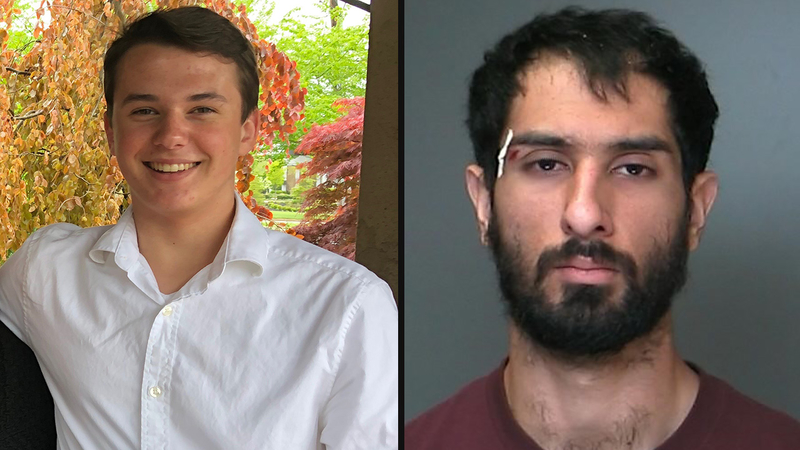 HUNTINGTON, Long Island -- An Uber driver is facing manslaughter charges in the death of a Long Island teenager who fell to the pavement after prosecutors say he was allowed to ride on the roof of the vehicle.

Fifteen-year-old Ryan Mullen suffered a traumatic brain injury and died hours after he arrived at a friend's house following the ride.

The driver, 24-year-old Danyal Cheema, is charged with second-degree manslaughter.

He made no comment at his arraignment and was ordered held on $200,000 bail. His license was also suspended.

"This was an incredibly bad decision by the defendant, a bad decision by the boys involved, obviously," Suffolk County District Attorney Tim Sini said. "But at the end of the day, that defendant is an adult contracted to safely bring those boys home, and he failed to do that."

The incident took place just after midnight on September 23 in Huntington Station.

Prosecutors say Mullen was with two other teens and that Cheema had accepted $40 to allow Mullen and another teen to "car surf" on the roof of his Toyota Highlander SUV.

Two of the passengers climbed to the roof, while the third recorded the incident on Snapchat. Mullen then fell off the vehicle and struck his head on the roadway.

Cheema drove the three teenagers to their destination at a residence in Huntington. Mullen, who had suffered severe head trauma, succumbed to his injuries in his sleep later that day.

Mullen's family is outraged and demanding answers. Why did Cheema let the boys try the stunt, and why didn't he call 911 when Mullen fell?

"What if the driver was responsible enough to say no?" dad Matthew Mullen said in an exclusive interview with Eyewitness News reporter NJ Burkett. "What if he reacted differently and got our son medical attention?"

If convicted, Cheema faces a maximum sentence of five to 15 years in prison. Police say he has confessed on video.

"Unfortunately, the defendant made a reckless decision and engaged in reckless conduct that caused the death of a young boy, and he'll be held accountable," Sini said. "There's no doubt about that."

Uber issued the following statement: "Words cannot describe how deeply troubled we are by this incident. Our thoughts are with the rider's family during this difficult time. This driver has been permanently removed from the app."

Watch more from Matthew and Janice Mullen as they speak about the case and the community outreach since their son's death.
EMBED More News Videos

N.J. Burkett has more reaction from the parents of Ryan Mullen.