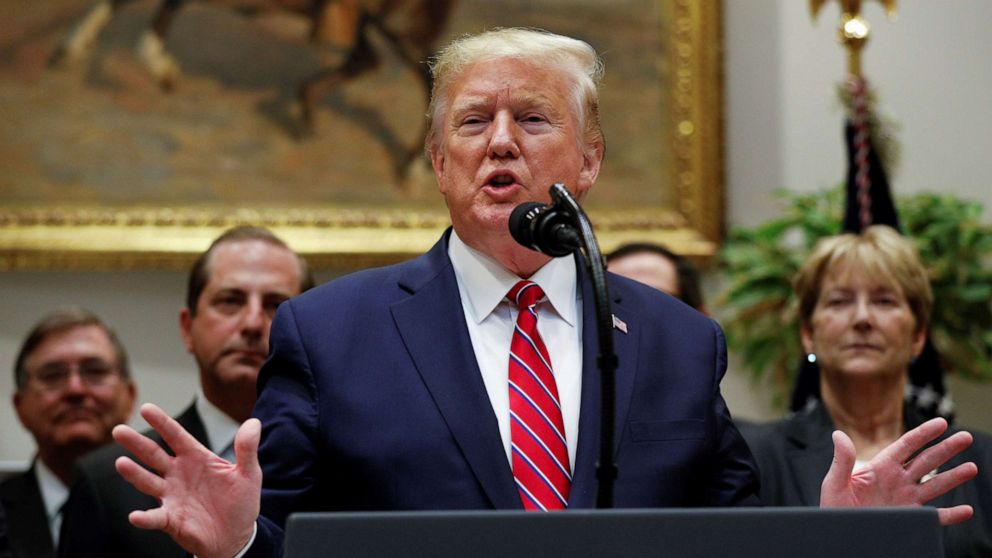 Saturday's appointment was not on the president's weekend public schedule, in contrast to Trump's 2018 and 2019 physicals, which were both announced ahead of time.

"Anticipating a very busy 2020, the President is taking advantage of a free weekend here in Washington, D.C., to begin portions of his routine annual physical exam at Walter Reed," White House Press Secretary Stephanie Grisham said in a statement after the president had arrived at the facility.

As Trump's motorcade returned to the White House, Grisham said that the 73-year-old president had undergone "a quick exam and labs." She added that Trump met with the family of a special forces soldier who was injured in Afghanistan while at the facility.

"The President remains healthy and energetic without complaints, as demonstrated by his repeated vigorous rally performances in front of thousands of Americans several times a week."

Visited a great family of a young man under major surgery at the amazing Walter Reed Medical Center. Those are truly some of the best doctors anywhere in the world. Also began phase one of my yearly physical. Everything very good (great!). Will complete next year.

- Donald J. Trump (@realDonaldTrump) November 17, 2019 Grisham did not explain why the visit had not been disclosed in advance or specify which tests Trump received. She later said the White House will not release results of the visit until Trump completes all aspects of his annual physical.

It was unclear when medical staff received notice of the visit. Walter Reed spokeswoman Sandy Dean said the hospital does not comment on patients.

This was Trump's 9th visit to Walter Reed as president.

While he has typically taken the Marine One helicopter to the Maryland facility, he traveled by presidential motorcade on the clear-skied afternoon in the beltway.

After Trump's last full physical examination in February, 2019, Dr. Sean Conley, the president's physician, released a memo saying the president was in "in very good health overall" and should remain so "for the remainder of his presidency and beyond."

Exam results showed that at 6-foot 3-inches tall, Trump had a body mass index of 30.4, passing the official threshold of being considered obese. He weighed 243 pounds -- up seven pounds from September 2016, before he became president. Results also showed that Trump had increased his daily dose of rosuvastatin, a medication used to treat high cholesterol.

One year prior, Trump's first comprehensive physical as president revealed he had a common form of heart disease and high cholesterol. Then-White House physician Ronny Jackson suggested a reasonable goal for the president would be to lose 10 to 15 pounds, but he praised Trump for otherwise "excellent health."

"It is called genetics," Jackson told reporters in the White House Briefing Room in January, 2018. "Some people have just great genes. I told the president that if he had a healthier diet over the last 20 years, he might live to be 200 years old."

Trump is the oldest president to ever take office. He doesn't drink alcohol or smoke, but he is known to enjoy fast food, steaks and ice cream. Golfing is his primary source of exercise.