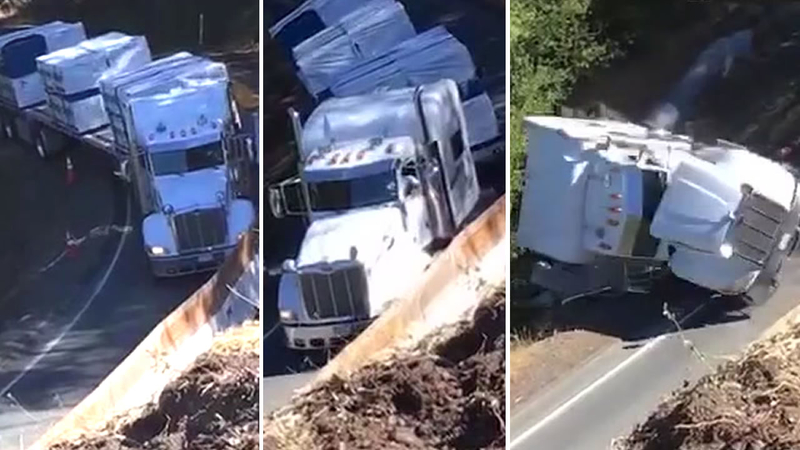 MENDOCINO COUNTY, California -- A video went viral of an over-sized semi-truck sliding down an embankment in California, and miraculously, the driver was not injured.

It happened on Thursday in Mendocino County, just north of San Francisco.

California Highway Patrol said they cited the driver, Christopher Cortez, for ignoring the many warning signs on the restricted roadway.

@Caltrans video from Route 175 near Hopland yesterday. Chronic problem on this stretch of road. Driver okay. Truck still below. Asking why and how. #abc7now pic.twitter.com/1OoKvQxeEy

"He stated that he saw a few of them," according to CHP Sgt. Robert Powers. "He said he would try to work his luck and see what he could do with it."

The truck came to rest 100 feet down the ravine, and requires a closure of the road for at least one day to retrieve it. The construction crew who recorded the video said they warned the driver, but he continued.

"The tractors take a different line than the trailers," said Jim Shupe with Caltrans. "His trailer got in the berm and the trailer pulled him over."

Certainly plenty of warnings for long trucks along Rt.175#abc7now pic.twitter.com/eMQ0HFgSPG

There was a similar, less severe incident on Oct. 2. Last January, a wine truck carrying hundreds of bottles failed to make the turn. It resulted in closing the same state highway for two days.

Another look at the turn on Route 175 where more than one semi truck has plummeted into a ravine. #abc7now @caltrans blames truckers not reading Warning signs on this restricted road. pic.twitter.com/kf3jqoIAGy

Despite road construction that has narrowed the two-lane road to one at the difficult turn, officials said it would still be restricted.

Powers was asked if a similar incident would happen again.