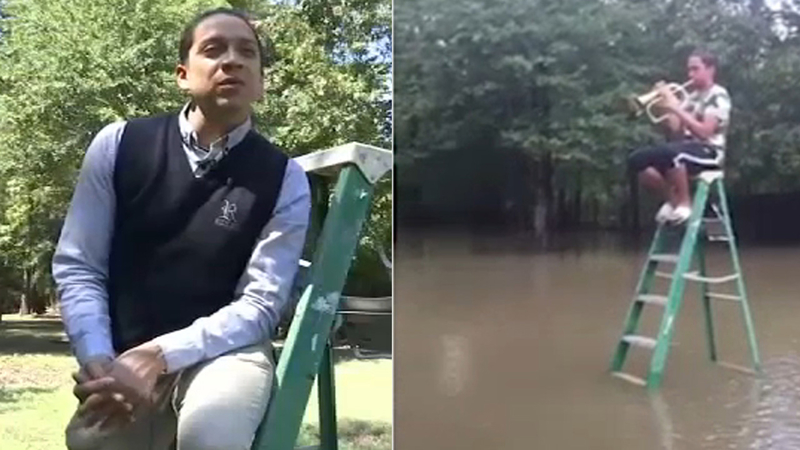 Man plays 'What A Wonderful World' despite flooded home

Geovani Ayala, a band director with the Conroe Independent School District, was captured on cell phone video playing the flugelhorn in his mother's backyard that flooded during Tropical Storm Imelda.

Ayala, who can play multiple instruments, says music is what provides him peace, so he decided to play the day after Imelda drenched the Houston area.

He started out in the front yard, but then moved to the back, pulling out a ladder into the middle of standing water and climbing on top. His song of choice: "What a Wonderful World" by Louis Armstrong.

In the middle of high water, this wind instrumentalist shows off his flugelhorn skills during the Imelda floods.

"I was surrounded by everything, and Mother Nature did its thing and there was nothing we could do to avoid that," explained Ayala. "So, the piece that came to my mind was, rain or shine, this is a wonderful world."

Ayala's mother took in nearly a foot of water and lost two vehicles to the remnants of Imelda. The family is now helping in the clean-up process, but admits that moving forward will be a challenge.

A family friend set up a GoFundMe account to help the Ayala family, garnering more than $1,300 on donations.

"That family... that flugle horn... strength and love in the face of adversity," wrote a supporter.