Splendora residents plead for help as mountains of trash pile up 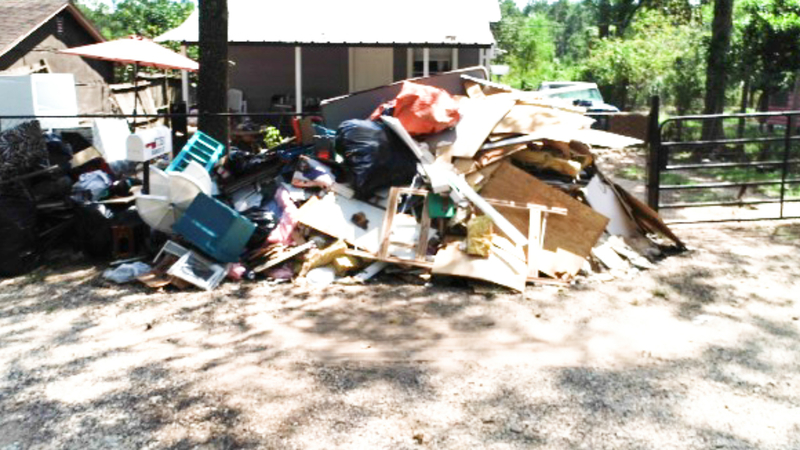 Help after Imelda nowhere to be found in Splendora

SPLENDORA, Texas (KTRK) -- William Thompson has had a bout of tough luck over the past four years. He's been through Hurricanes Rita, Ike, Harvey and each time, his Patton Village home has been destroyed.

"I would much rather deal with wind damage than something like this because it's just it's very hard to get over," said Thompson.

His home has once again been destroyed, this time from Tropical Storm Imelda.

He's one of many people in the area still cleaning up from the damage caused by Imelda. A lot of them say they're having to do all of this on their own.

"The longer it goes, the worse it gets, and the more people get compromised," said Rocky Snyder, who's been going around helping people whose homes were damaged in the storm.

Thompson has been helping Snyder, despite his own home being destroyed.

"Whatever you can do to help it just makes you feel good inside," said Snyder.

Despite their efforts, they say they need more help. They're appealing to anyone and everyone.

"There's not enough people helping for how many people are devastated," said Snyder.

At New Beginning Baptist Church, they've been working around the clock to hand out food and water to people affected by the storm. Pastor Scott Anderson says they're a beacon of hope in their tiny community.

"When a disaster comes, we do it on a grand stage like we're doing right now," said Anderson.

So far, they've helped more than 500 families in the area. Since Hurricane Harvey, they've produced more than a million pounds of food from their small church, serving more than 7,000 families. Anderson says they won't stop helping.

"We put off our personal needs to supply for other folks and I know that God will always make a way for ours to have ours done," said Anderson.

Back over at what's left of Thompson's home, they're holding out hope that someone will come and help them and the many other families who are still dealing with the aftermath of Imelda weeks later.

Thompson said, "For the low-lying areas of Patton Village, Splendora, New Caney, the word has to get out about these people because we shouldn't have to suffer through something like this because we're not big city."

Rocky Snyder says if you're interested in helping out, you can reach out to him at 832-388-9368. You can also reach out to New Beginnings Baptist Church in Patton Village.