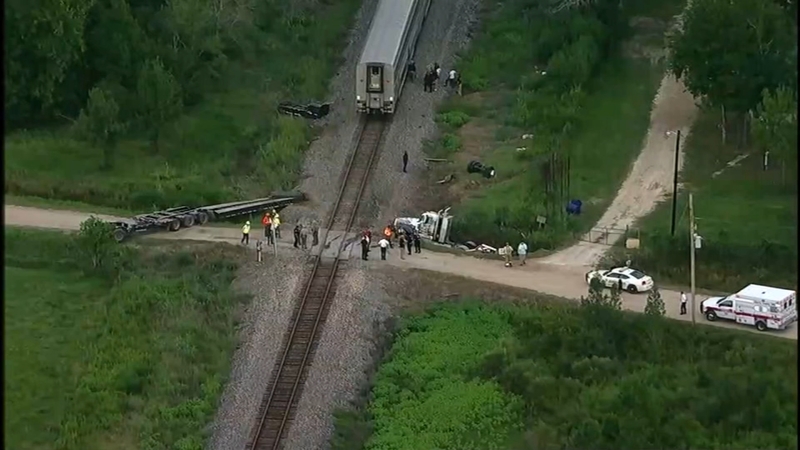 A train bound for New Orleans is moving again after it partially derailed in a crash with an 18-wheeler, injuring 18 people in Liberty County.

"It was like a mini-earthquake. I never heard the house shake like that," said Aline Gonzalez, who lives nearby.

The Amtrak train from Los Angeles was carrying 70 people on board when it crashed, splitting the 18-wheeler in half.

The Department of Public Safety said some of the injuries included bumps on the head from when the train hit the brakes. The injured were then transported to the Dayton Regional Medical Center.

Neighbors told ABC13 they did not hear the sound of a horn before the accident happened. There are no arms or lights at the crossing.

"My heart dropped. I can tell you that my heart dropped," said Gisselle Hernandez, who lives next to the tracks. "I thought the train came off the tracks and was going to hit the house."

Debris from the impact struck a tree in her yard.

Amtrak said the lead locomotive had some minor wheel damage that caused the derailment.

The driver of the 18-wheeler also suffered minor injuries but was up and walking, according to DPS.

By 7:45 p.m., the train was once again, on the move. According to Amtrak, it was heading to Houston instead of New Orleans.

DPS Troopers responded to a crash involving a Amtrak train, and a 18-wheeler near CR 621 in Liberty Co. 17 passengers and the truck driver were transported to Liberty Dayton Hospital for minor injuries by Medical Bus. Crash investigation is on-going. pic.twitter.com/f1Y9TdOBau