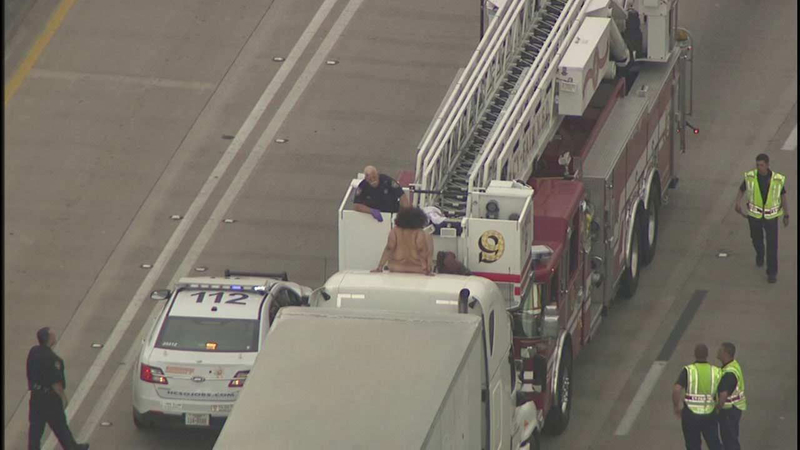 HOUSTON (KTRK) -- A bizarre rush hour crash shut down Highway 290 at Huffmeister Road Monday morning. After a wreck, a woman stripped down and got on top of the cab of a big rig.

That woman refused to come down for about two hours. Firefighters and police officers finally coaxed her into a ladder truck basket at about 11am.

"I just hope that her being naked, and being belligerent doesn't take over the situation, and that they can just get her some help," said Keaton Gray, one of many eyewitnesses glued to the unexpected sight.

Jersey Village police say the chain of events began around 9:15am. That's when the woman got in a fender bender at Jones Road and 290. She didn't stop and drove off.

The driver of the 18-wheeler could not talk on camera because of his job. However, he told Eyewitness News that the woman simply weaved in and out of traffic, and then jumped on his truck. She soon took off all her clothes.

The woman, clearly agitated, stood up a few times, but then returned to sitting on the cab of the 18-wheeler. She even did a few dance moves.

"I can't repeat most of the things she was saying but she was very confused and had a lot to say," said Brian Shirley of the Cy Fair Volunteer Fire Department.

Eyewitness News spoke to family members of the woman on the phone. They said she has mental health problems and is getting treatment.