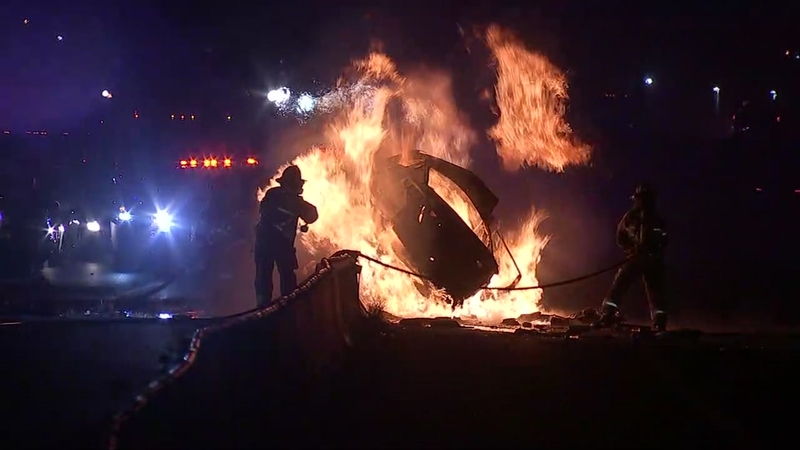 HOUSTON (KTRK) -- Highway 225 at Allen Genoa has reopened after a fiery wrong-way crash that killed a man.

The wreck happened just before 3am near the Allen Genoa exit and our cameras captured exclusive video of the aftermath.

Eyewitness News photographer Jesus Amaya was on his way to work when he saw two cars on fire.
The crash was caused by a wrong-way driver, police say.

The driver of a pickup truck was allegedly speeding westbound in the eastbound lanes of 225 when he slammed into a car traveling eastbound. Both vehicles burst into flames.

HPD says the male driver of the car died at the scene of the crash. Officials have identified him as 31-year-old, Adolfo Moncivais, Jr.

The driver of pickup truck, Ismael Deleon who police say caused the accident, survived and was taken from the scene in an ambulance. The Harris County District Attorney's office said Deleon has a previous DWI conviction and is now charged with intoxication manslaughter.

We spoke to a man who saw the whole thing happen.

He says he saw the guy in the truck get on 225 the wrong way, tried to speed up to get that driver's attention, but he could not match the speed of the wrong-way driver. He says he then watched as that truck hit a car head-on.

"Called 911, came over and immediately tried to get him out of the truck and see if any one was in the car, but no one was in the car, they were under the car, so that's not something that you want to see happen," witness Michael Morrow said. "It's a very eerie feeling."

The force of the impact sent the victim's car out of the eastbound lanes and into the westbound lanes.
Related topics:
trafficharris countyhoustonwrong waytraffic accident
Copyright © 2021 KTRK-TV. All Rights Reserved.
More Videos
From CNN Newsource affiliates
TOP STORIES