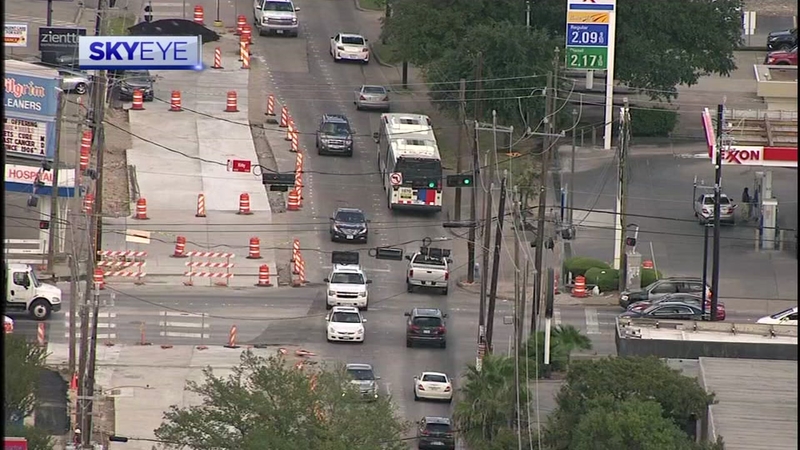 HOUSTON (KTRK) -- It's bumper to bumper all day for drivers at the intersection of Kirby and Bissonnet.

"There's always a lot of traffic here anyway, and with the construction it's that much more so," said driver, Yvette Abernathy.

Orange barrels have taken over about half the lanes for street improvements and lately the only thing slower than the traffic, is business at the Houston Shoe Hospital as construction has slowed to a crawl.

The Upper Kirby District confirms that work on this project has halted in recent weeks, and although we did see some contractor trucks at the intersection, there's frustration with the recent holdup.

"We've been like this for about three weeks now, with no construction workers working at all," said Cody Williams of the Houston Shoe Hospital.

Part of this project includes moving utility lines underground. CenterPoint said they've been ready to move forward since July, but are waiting for other telecommunications companies, including Comcast to prepare its lines, in order to move forward.

Comcast has released a statement saying in part, "We're currently waiting on the City of Houston to provide location maps of the right conduit so the project can move forward."

Meanwhile, the Upper Kirby District said there are work issues with the contractor as well, but did not disclose specifics. We reached out to the contractor, but the project manager was not available.

However, the back and forth is not pleasing to drivers or businesses.

At Pilgrim Cleaners, only the most loyal of customers are still coming in, like customer, Amy Garrou,"It's been pretty stalled for the last month, and I felt like after they poured the concrete we'd be almost done, but nobody's been out here. It is still a challenge getting in and out."