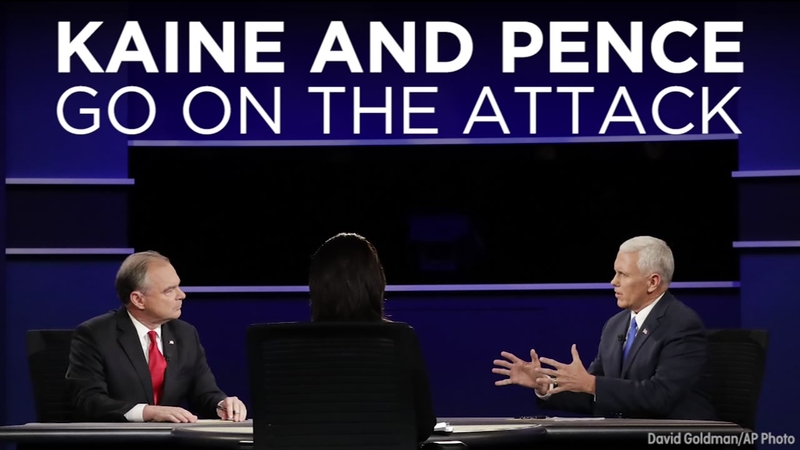 FARMVILLE, Va. -- Just because vice presidential nominees Tim Kaine and Mike Pence were seated during their debate Tuesday night, it didn't stop things from getting heated onstage at Longwood University in Farmville, Va.

"Well, let me say first and foremost that, senator, you and Hillary Clinton would know a lot about an insult-driven campaign," Republican nominee Pence responded.

The two men defended their running mates' stances on immigration, the economy and women's reproductive rights, while slinging one-liners targeting Hillary Clinton and Donald Trump's past comments on national security and even each other's supporters.

"Donald Trump during this campaign has called Mexicans 'rapists' and 'criminals,' he's called women 'slobs,' 'pigs,' 'dogs,' 'disgusting;' I don't like saying that in front of my wife and my mother," Kaine said.

"If Donald Trump had said all of the things that you said he said in the way you said he said them, he still wouldn't have a fraction of the insults that Hillary Clinton leveled when she said that half of our supporters were a basket of deplorables," Pence said. "She said they were irredeemable. They were not American."