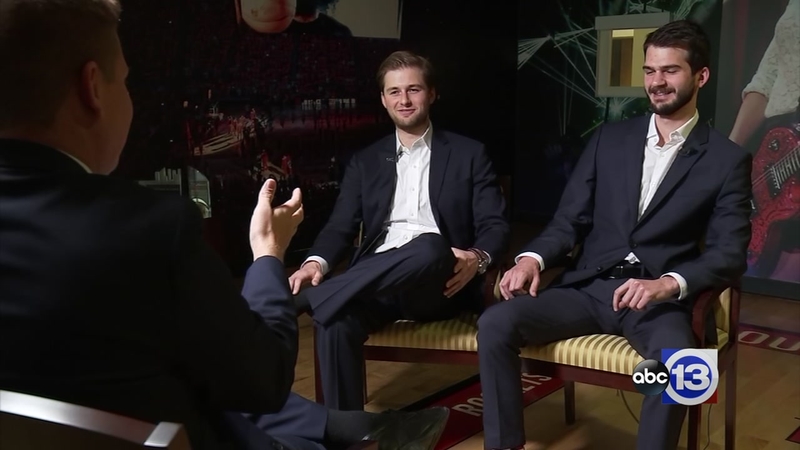 HOUSTON (KTRK) -- Michael, 25, and Patrick, 23, Fertitta are the oldest sons of Houston's most well-known billionaire. They grew up with Tilman Fertitta as their father.

RELATED: Who is Tilman Fertitta, the man who bought the Houston Rockets

"It's all I know so it's hard for me to compare it to anything else," said Michael Fertitta. "People say Tilman Fertitta. I just see my dad."

The young men are in their 20s now. They both graduated from college. Michael attended Ole Miss and Patrick attended the University of Southern California.

They are back in Houston and ready to help run the family empire.

"At the end of the day, we know we have to cut out our own place in this world," said Patrick Fertitta. "We have to work hard for everything we get."

We met the sons last week inside the Toyota Center. They seemed remarkably down to Earth considering their father recently purchased the Houston Rockets. Both also appear to be quintessential millennials who post about their lives on social media. Patrick uses the handle "PapaFoxTrott" on Instagram while Michael just uses his name.

"For the most part, my dad is really good in front of a camera. We've kind of been in the back watching and learning," said Patrick Fertitta. "I think over the next few years you're going to see a transformation at the Toyota Center. There is no secret, it is 15 years old."

The brothers talked candidly about their dad and the family business. They're actively a part of Landry's which is one of the biggest restaurant groups in the country.

The Fertitta sons described themselves as two of his toughest critics who supported his decision to buy a professional basketball team. They said stay tuned for big changes at the arena especially once the Rockets head into the off-season.

The only question which seemed to catch them off guard was whether they would call themselves Houston's most eligible bachelors.

The big takeaway we got from sitting down with the brothers is that they seem eager and ready to help Fertitta's influence and business grow in the city. They both say they have no plans of leaving Houston and promise they're committed to making it bigger and better.

"We love this town. We love how it's treated our family," said Patrick Fertitta. "We want to do whatever is best for the city of Houston."

Michael said that could include bringing a professional hockey team to the Toyota Center. He said he supports the idea. The Fertittas are now exploring where a team can make money in the Bayou City.

RELATED: Will Fertitta bring the NHL to Houston?