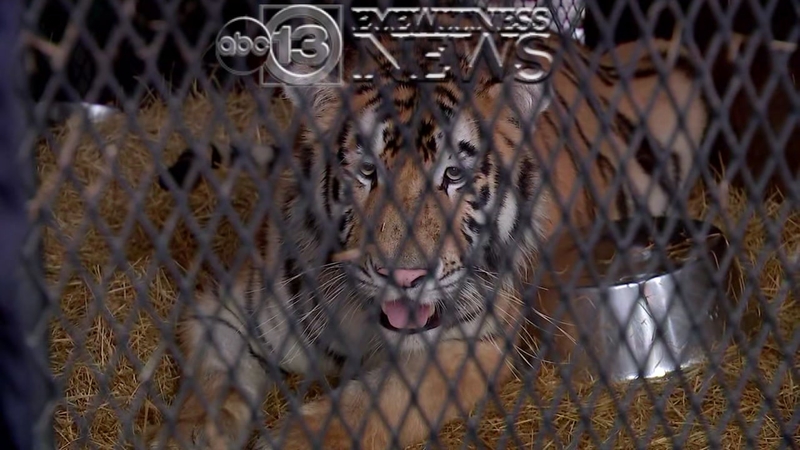 HOUSTON, Texas (KTRK) -- Police say someone who went to an abandoned home in southeast Houston to smoke marijuana, ended up discovering a tiger inside of it.

The cage that kept the animal enclosed was not large or sturdy enough for such a creature of that size.

While the home was abandoned, several packages of meat were found with the animal.

"A concerned citizen called 311. They were trying to get into this house to smoke marijuana. We questioned them as to whether they were under the effects of the drugs or they actually saw a tiger. They saw a tiger in this building, this vacant house that's obviously been abandoned for some time," said Sgt. Jason Alderete, of HPD's Major Offenders, Livestock Animal Cruelty Unit.

After obtaining a warrant, they found the tiger in deplorable conditions.

She was friendly, they said, but she was tranquilized for safety reasons as they moved her from the home over to BARC's headquarters.

"We made arrangements for the tiger to be transferred to another facility that is licensed to handle exotic pets," said Laura Cottingham, the city's spokesperson for BARC.

"Finding a forever home for a tiger is not easy," said Cottingham, who is currently caring for six exotic animals at a cost of more than $1 million.
"I tried to explain to people it's a lot like having a child. If you have a child, you have insurance but these guys don't have insurance," she said.

She's seen cases where some tigers are smuggled in from Mexico, and said unfortunately, there are small pockets of breeding facilities across the country. She says it is never a good idea to keep one as a pet.

"They are basically a loaded gun pointed at anyone that encounters them," she said. "They can be extremely dangerous."

Right now, it's unclear what charges, if any, the owner may face because it's under investigation.