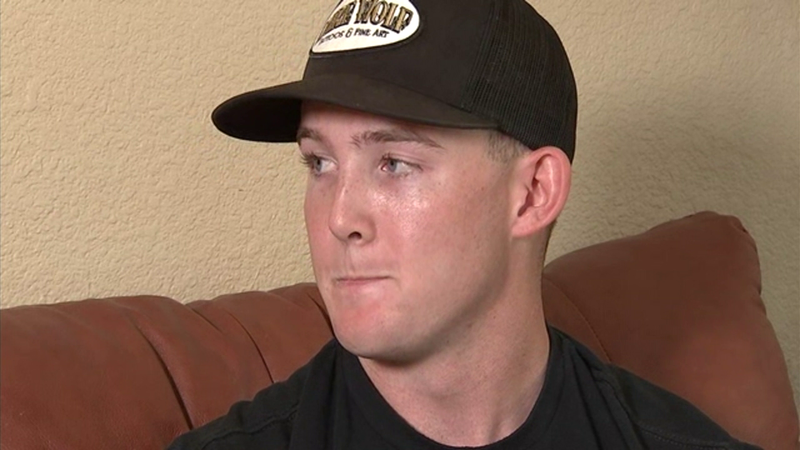 THOUSAND OAKS, California -- A man who survived the deadly mass shooting last year in Las Vegas also miraculously came out of a mass shooting at a bar in Thousand Oaks alive Wednesday.

Brendan Kelly said he is a regular at Borderline Bar and Grill, frequenting the venue two or three times a week. Kelly was there when shots rang out Wednesday night around 11:20 p.m.

By the time the shots stopped, 12 people were dead, including the shooter. A Ventura County sheriff's sergeant who responded to the shooting died later at a hospital after being shot multiple times.

Kelly said he had been at the bar for about an hour dancing when he heard the first shots. "Pop, pop," said Kelly, describing the sound he heard. "Being in the military, being in the Marine Corps, I'm aware of what that sounds like, especially in an enclosed area."

Kelly said he immediately sprang into action, grabbing people around him and throwing them to the ground for cover.

"As soon as I identified where the target was, or where the threat was, I grabbed at least two people around me and yanked them as hard as I could to get to the nearest exit," Kelly said.

Kelly said he and the others he rescued were able to make it out a back exit to safety.

Kelly said after surviving the Las Vegas massacre a little more than a year ago, it is difficult to cope with a shooting just down the street from where he lives.

"It's too close to home," Kelly said. "Borderline was our safe space after, for lack of a better term, it was our our home for the probably 30 or 45 of us who are all from the greater Ventura County area who were in Vegas. That was our place where we went to the following week, three nights in a row just so we could be with each other."

In the minutes after his narrow escape, Kelly made the call to his family members that he hoped he would never again have to make after Las Vegas. He could still hear gunshots in the background.

As injured victims began emerging from the bar, Kelly rushed to help, removing his belt to apply a tourniquet to a friend's arm. "I wanted to help as best I could," said Kelly. "If we could be the first level of first responders before they got there, then you do all you can do instead of standing around not doing much."

Kelly said he has not yet been able to wrap his mind around his survival of a second mass shooting in a little more than a year's time.

"Only thing I can attribute it to is God," said Kelly. "His protective hand over me that night, on Oct. 1, and last night."