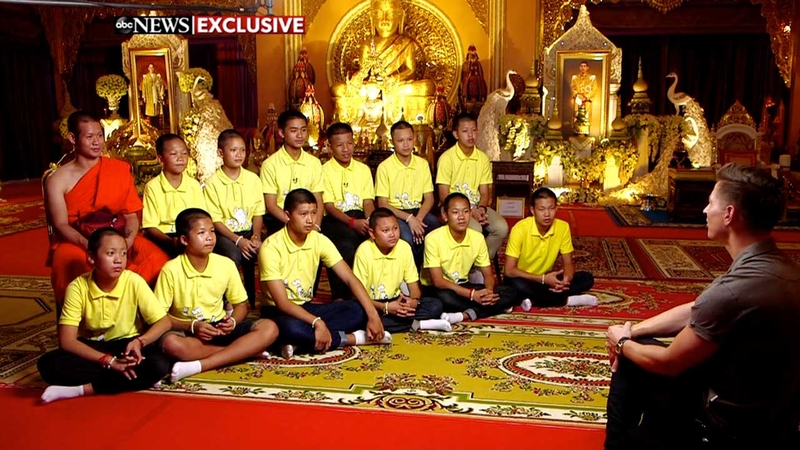 MAE SAI, Thailand -- More than a month after the whole world watched them safely emerge from a cave in Thailand, a youth soccer team is reflecting on the love they have received from all over.

"I would like to thank everybody. You all love me and I love everyone," one of the boys, 14-year-old Adul Samon, told ABC News. "I feel like people around the world are my parents."

RELATED: These are the soccer players and coach rescued from a flooded cave in Thailand
EMBED More News Videos

Photos from social media show the 13 members of a Thai youth soccer team, 12 players and one coach, all of whom have been trapped in a partially flooded cave in northern Thailand for weeks.

When the 12 boys and their coach became trapped in the cave, they at first didn't all know the extent of the situation.

"When I realized we were stuck inside the cave, I didn't tell them because I didn't want to panic them," said their coach, 25-year-old Eakapol "Ek" Jantawong.

Their harrowing ordeal lasted 17 days. The rescue of the boys was nothing short of miraculous, as even the rescue leaders did not expect the boys to survive. Just one child coming out alive would be a success, according to Maj. Charlie Hodges, the U.S. major in charge.

The rescue began on July 8, almost a week after they were finally found by British divers.

"I asked Adul and Biw to translate, but no one was because they were so surprised, so I was shouting, 'Please someone translate!'" Coach Ek recalled.

RELATED: Everything to know about the Thai cave rescue

Coach Ek said they had no idea the attention their story had received, a point which he illustrated with an amusing memory.

"We all decided that the boys who lived farthest from the cave would go first so they had time to bike home to tell their parents they were safe," he said. "We really had no idea there would be so many people outside."

Since emerging from the cave, the team has received international attention. The boys, who spent time as novice monks since the rescue, said their experiences have taught them the meaning of love.