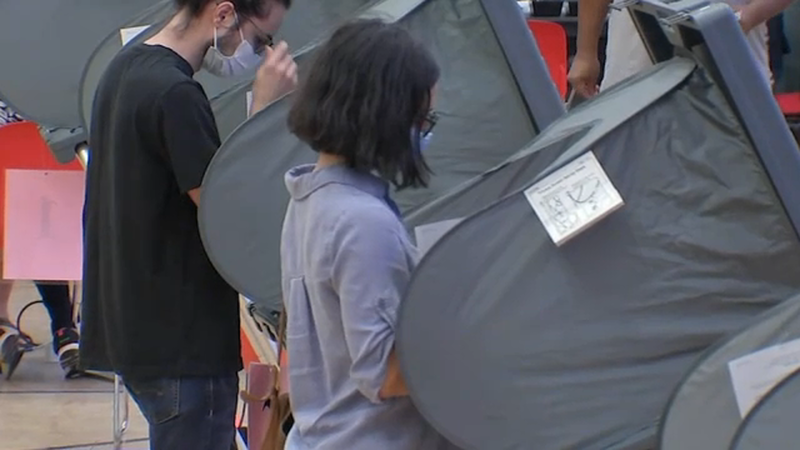 What happens to your vote after you cast your ballot?

HARRIS COUNTY, Texas (KTRK) -- Tuesday is primary election day in Texas, and it is the first major election in Texas since the passage of Senate Bill 1, the Election Integrity Bill. So, ahead of you going to the polls on Tuesday, ABC13 spent time with a pair of election administrators to give you a look at what happens before you ever cast your ballot and what happens to it after you vote.

Isabel Longoria is Harris County's elections administrator. Longoria is in charge of 13,000 pieces of election equipment for 2.5 million voters.

"No election, big or small, can happen without voters knowing it was done well," Longoria told ABC13. "Security has always been a priority for us in elections, spotlight or not."

That spotlight was especially glaring after the 2020 contest, a national discussion about election integrity, and the Texas legislature enacting Senate Bill 1, among other changes that provide what supporters call safeguards and what critics call suppression. There was no evidence of widespread voter fraud in Texas in 2020, a state audit confirmed.

Still, we had questions about the process behind the scenes before and after you cast your ballot.

Longoria explained that even before individuals vote, there are multiple logic and accuracy tests witnessed by observers from both major political parties that ensure the machines and the process are 100% true.

On Election Day, voters show up with an ID and make their choices. After that, there is a very specific process.

Eyewitness News anchors Melanie Lawson and Tom Abrahams are getting you answers as to how Texas' new voting laws will impact the 2022 primary elections.

"You get a piece of paper," Longoria explained. "Put that paper into the machine. Make your selections. You get your selections. It's not a receipt. Don't throw it away. You have to scan it back in the ballot box that will be toward the exit of the voting location. From there, the ballots are secured in a locked box that only the judge and the constable have a key to. Come election night, they secure that box, they tag the scanner. Then they hand it over to a constable who calls dispatch to say the ballot box is moving from the location to our election warehouse, where we then, as election staff, receive it, make sure that the tags line up with what was sent from the location we've been receiving. Then from there, we open the ballot box and start tallying those votes on election night."

John Oldham, the election administrator in Fort Bend County, told us that the county was installing cameras which will livestream collected ballots from the time they reach central counting to the time they're officially canvassed. Oldham said it's part of SB1 and all counties will offer the same livestreams. He also assures the one-half million voters in his county that their votes are secure, saying that they go from voting locations to one of four collection sites. Each vote has a paper ballot and two electronic copies.

"Once you drop that ballot in the ballot box and it's tabulated, it's pretty secure. There is no way to really change those results," Oldham said. "There is a chain of custody where some of that information is transferred over to some of our employees and then they will upload results."

Does any of this mean Election Day will be flawless or without issue? No. There are always bugs, but election administrators with whom ABC13 spoke with said their systems are safe and Texans should have confidence in the results. That's the same message we got from the Texas Secretary of State's Office, which oversees all 254 county elections at the state level.

"They (Texans) can be 100% comfortable that their vote will count," said assistant secretary of state Sam Taylor. "There are numerous sets of safeguards and checks to make sure that outside meddling is not permitted. None of the voting machines are ever connected to the internet."

Longoria, who will oversee seven elections in Harris County in 2022, the most since 1996, said this year is an important election year. She wants those who cast their ballots to understand their vote, every vote, counts.

"It's a methodical process with a lot of checks and balances and a lot of oversight from our Democrats and Republicans, poll watchers, secretary of state, to make sure that, again, every step of the way is certified, secured, so that voters know that when they go and cast their ballot, it's done correctly, it's done properly, and it's counted accurately," Longoria said.