By Eleanor Klibanoff and Uriel J. García, The Texas Tribune 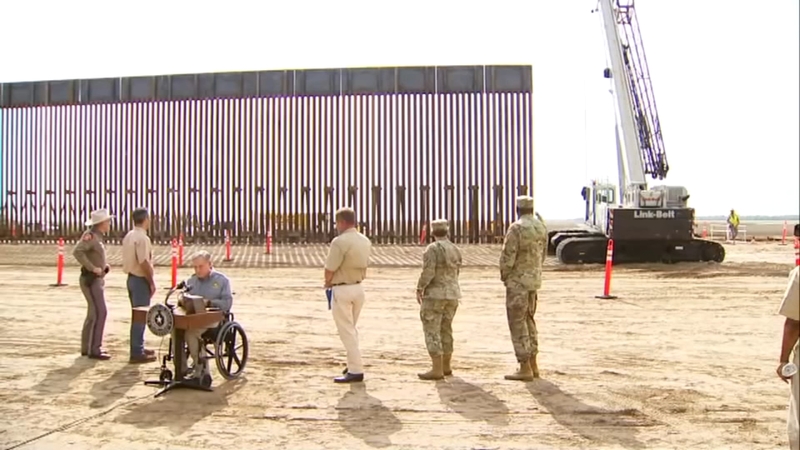 Texas Gov. Greg Abbott visited Starr County on Saturday to inaugurate the first stretch of a border wall being built by the state, calling it an "unprecedented" investment in border security.

Construction crews on site said about 880 feet of barrier have been installed as of Saturday afternoon, according to the Texas Tribune.

Abbott has made immigration enforcement one of his top agenda items as he seeks reelection next year. At a news conference in front of the new wall segment Saturday, Abbott condemned the federal government's immigration policies - though some were extended from the Trump administration - and criticized President Joe Biden's reversal of the efforts to build a barrier between the U.S. and Mexico.

"This unprecedented action is needed for one single reason, and that's because the Biden administration has failed to do its job," Abbott said.

The Biden administration currently enforces two strict Trump-era immigration policies. Title 42, a pandemic health order, was issued by the Centers for Disease Control and Prevention last year to rapidly expel migrants to their home countries without the opportunity to ask for asylum. Following a court order, the Biden administration also revived the Trump administration's Migrant Protection Protocols, which forces asylum-seekers to remain in Mexico as their cases make their way through U.S. immigration courts.

"Border communities are tired of Greg Abbott hosting photo-ops instead of of fixing the real challenges facing our border communities today, like the Abbott Tax border families will pay on their utility bills because he has failed to fix the grid," O'Rourke said in a statement.

Abbott was joined by Texas General Land Office Commissioner George P. Bush, as well as representatives from the Texas Department of Public Safety and the Texas National Guard.

Bush, who is currently running for Texas Attorney General, said this stretch of wall was being constructed on state-owned land that has been leased out to a local farmer.

"It's on state acreage that we stand today where the people of Texas finally said, enough is enough," Bush said. "Enough of open borders, enough of disorderly chaos... If the Washington, D.C. establishment doesn't do their job, Texas will."

Abbott announced in June that the state would build a wall along the Texas-Mexico border using state money and crowdfunded private donations. The governor's office appropriated $250 million of state money as a down payment for the wall-building effort, and lawmakers appropriated an additional $750 million for border barriers during one of the legislative sessions this year.

As of Dec. 13, the state has collected $54 million in private donations, mostly coming from one single donor: Timothy Mellon, the chair of Pan Am Systems, a privately-held transportation and freight holding company. Mellon has previously donated to immigration enforcement efforts in the past.

In total, the state now has at least $1.05 billion for its border barriers.

On a Fox Business Network program Friday, Abbott noted that the state-funded wall will cost less than the Trump-era estimates indicated because Texas will be using land the state already owns, versus having to acquire the land.

Unlike the border in California, Arizona or New Mexico, which is largely federal - or in some cases tribal - land, much of the Texas-Mexico border is privately owned, with some owners holding the titles to their property since the 1760s.

In September, the Texas Facilities Commission awarded an $11 million contract to a joint venture between Michael Baker International Inc. and Huitt-Zollars to manage the project, identify state land where barriers can be built and find "willing private landowners to facilitate construction," according to the request for proposal.

The wall panels are being put up by Posillico Civil, Inc., which was awarded a contract not to exceed $162 million in November.

Texas Facilities Commission Chair Steven Alvis said at the news conference Saturday that the wall construction process has been moving expeditiously, noting that steps that usually "take two to three months took two to three days." He said this stretch of wall went up in five days.

The Trump administration completed 55 miles of barrier along the Texas-Mexico border 21 miles of new barrier and 34 miles of replacement barrier.

Abbott has ramped up immigration enforcement in recent months, flooding the border with state troopers and National Guard personnel instructed to arrest migrants on state criminal charges. Just this week, immigrant and civil rights groups called on the Department of Justice to investigate the program. Abbott has also sued the Biden administration for attempting to reverse Trump-era immigration policies.

Mandi Cai contributed to this report.

Disclosure: The Texas General Land Office has been a financial supporter of The Texas Tribune, a nonprofit, nonpartisan news organization that is funded in part by donations from members, foundations and corporate sponsors. Financial supporters play no role in the Tribune's journalism. Find a complete list of them here.