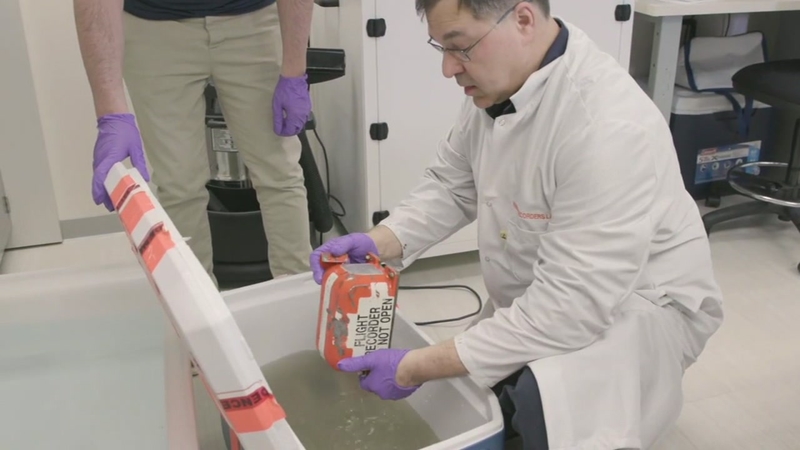 ANAHUAC, Texas (KTRK) -- The National Transportation Safety Board is now preparing to recover data from both "black boxes" found at the site where a Boeing 767 cargo plane crashed on Feb. 23.

Authorities found the first box Friday after a continuous search of the Trinity Bay. The second box, the flight data recorder, was found Sunday.

NTSB has recovered the cockpit voice recorder from the cargo jet that crashed in
Trinity Bay in Anahuac, TX. CVR being transported to NTSB labs in DC and will
be evaluated when it arrives.#Anahuac

Earlier this week the Chambers County Sheriff's Office announced the discovery of additional human remains, while also cautioning that the remains were not yet confirmed to be from the third remaining aircraft crew member still to be accounted for. Authorities were able to locate the remains of two people shortly after the incident.

Capt. Ricky Blakely, First Officer Conrad Jules Aska, and pilot Sean Archuleta were confirmed to be on the plane at the time of the crash.

None of the remains have been identified yet.

Searchers expressed difficulty in seeking the victims and key evidence from the crash. The plane and its cargo were shattered into pieces in the marshy terrain.

Chambers County Sheriff Brian Hawthorne and the National Transportation Safety Board are asking property owners and boaters in the Trinity Bay and Galveston complex to be on the look out for floating wreckage and cargo from the crash of Flight 3591. This wreckage and the cargo, which includes Amazon packages and U.S. mail among other items, is important to the investigation of the crash.

Officials stress that any luggage and personal items that belonged to the crew members are very important to the NTSB. If you spot anything that appears to be related to the flight crews, they are asking you bring it to their attention.

Items can be taken via land to:
Chambers County OEM building at 202 Airport Road in Anahuac
Beach City Volunteer Fire Department at 12717 FM 2354 in Beach City

Boaters can take items via water to: