'Please support us:' Texas' citrus and dairy farmers urge patience as they rebuild after the winter storm 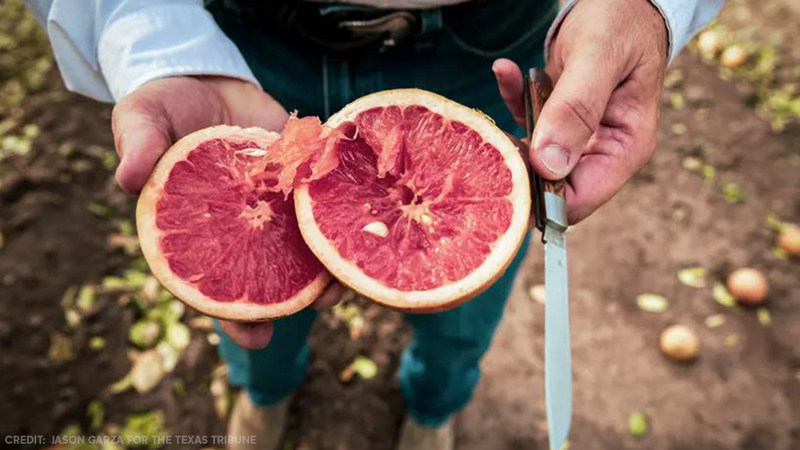 #HoustonStrong: Here's how we made it through the winter storm

Well before the sun finally broke through the cloudy and icy haze in Texas' Rio Grande Valley last week, Dale Murden knew he was in for a bad spell.

After a few days of clearer skies and warmer weather let him assess the damage to his grapefruit orchard in Harlingen more closely, the South Texas citrus grower confirmed his fears.

"As time goes on, it'll start to look worse," said Murden, who is also the president of Hidalgo County-based Texas Citrus Mutual.

The winter storm that paralyzed Texas for days last week is going to have lasting effects on Murden and his fellow citrus growers in the Rio Grande Valley after the extended freeze killed millions of pounds of citrus. The storm also brought the state's dairy industry, concentrated in the Panhandle, to a near standstill when widespread power outages halted processing.

Though it's still too early to put a dollar amount on the losses, industry leaders are urging patience as they try to restock grocery shelves.

"As a grower, I would appeal to consumers to stick with us and, when we do get back on the shelf, please support us," Murden said.

The 20-year annual average for grapefruit produced in the Rio Grande Valley is about 460 million pounds, Murden said. More than half of this year's yield will be lost after the storm, and Valencia oranges, which are considered late-season harvests, will be nearly a total loss, he added. The damages will extend into next year because the freeze also damaged citrus blooms that would become fruit for the next season's harvest.

"This will last well into 2021 and 2022," he said. "The ability for Texas grapefruit growers to get it to your shelf right now is zero until we start growing a crop."

The effects on the state's dairy industry will be shorter, but the duration will depend on how quickly milk and other products can be processed, said Darren Turley, the executive director of the Texas Association of Dairymen. Most of Texas' livestock survived the harsh weather, he said, but a loss of power meant processing and production was at a standstill and will need time to recover.

Turley said Panhandle livestock are used to severe winter weather, "But our natural gas was turned off and so much of our processing relies on that."

Turley said even though producers had to keep milking their cows - which stop producing if they're not milked regularly - thousands of loads of milk were lost because it couldn't be processed.

That means that milk and products like cream cheeses, ice cream and powdered milk will be hard to come by in some areas of the state, at least in the short term.

"Tomorrow, or in two days or whatever the schedule is, a truck will come and then it'll empty again and it'll be like that for some time until we get production met back up," he said Monday. "The industry itself will feel it for some time."

Texas beef and cattle production was largely spared. Although there was some loss of life of livestock, including calves, sheep and goats, the industry is expected to only feel short-term effects from the storm, said Gary Joiner, director of communications for the Texas Farm Bureau.

"There is enough supply in the chain to recover and to rebound from what was displaced [during the storm last week]," he said. "I think I can speak with confidence on the beef side that that should be replenished. Eggs and breads, those should also resume normal shelf capacities."

As Texas elected officials continue to assess how to protect the electric grid from the next winter storm, Joiner said he hopes food security in Texas will stay at the forefront of the conversation.

In the past year, Texans "have seen two events in which food security became an issue at the grocery store," he said, referring to the storm and the COVID-19 pandemic. "It's a small group of people producing an essential product for the remainder of the public and when small disruptions and small delays occur, everybody gets awakened to it."

The Texas Tribune is a nonprofit, nonpartisan media organization that informs Texans - and engages with them - about public policy, politics, government and statewide issues.
Report a correction or typo
Related topics:
texasfarm to tabletexas newswinter stormgreg abbottfoodtexastexas tribunefarmingfruit
TEXAS TRIBUNE
Texas agriculture commissioner suing to stop aid for Black farmers
Inside Texas hospital battling omicron: 'We're about to catch on fire'
Is is too late for the Ike Dike to be built?
Texas AG Ken Paxton, who has fought vaccine mandates, contracts COVID
TOP STORIES
51-year-old suspect in corporal's ambush killing on the run
Sergeant was to walk daughter down aisle until his hit-and-run death
Mom shares story of son's 'scary' battle with COVID complications
H-E-B's Scott McClelland retirement and what's next
Drying out but staying cool this week
LULAC set to sue Houston City Council for lack of Hispanic members
New security director aims to improve safety for Jewish organizations
Show More
IRS changes you should know before submitting taxes
Cause of death revealed for 23-year-old woman found dead after date
Texas among states suing Google over claim it's misleading consumers
Man accused of stabbing K-9 in The Heights now charged
'We knew something big exploded': ABC13 recalls moment of Watson blast
More TOP STORIES News