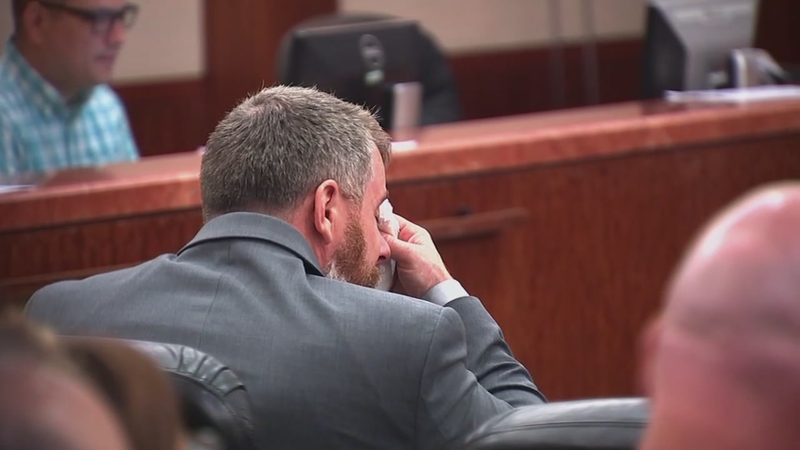 HOUSTON, Texas (KTRK) -- After seven hours of deliberation on Wednesday, the jury in the Terry Thompson murder trial was ready to hand down his sentence. They agreed on 25 years.

Terry Thompson sentenced to 25 years in prison for the murder of John Hernandez.

Thompson almost collapsed to his seat. He then looked back for a moment at his wife and two children who were seated behind him.

Chauna Thompson, a former Harris County sheriff's deputy, was there on that May 2017 night her husband placed John Hernandez in a chokehold outside of a Denny's near Crosby, killing him. Her trial is set for next year.

25 YEARS: Chauna Thompson, who also faces murder charges in John Hernandez's death, was solemn after her husband's fate was decided.

ABC13's camera was recording as the Thompson family slipped out of the courtroom quickly before the impact statements were read. First to take the stand was the mother of John Hernandez, who told Thompson in Spanish he caused the family great grief because he took the love of her life. Soon after, Hernandez' girlfriend, also there that night, took the stand.

Thompson in tears nodded his head at Hernandez' girlfriend after she said she could forgive him if he repents. Both then looked into other's eyes silently for a moment. She then walked off.

Soon after, outside the courtroom, Harris County District Attorney Kim Ogg and the Hernandez family addressed the media outside. Ogg thanked everyone involved in this case from the very beginning and praised the jury for sending a message.

"Everyone is equal under the law, and anyone who takes a life will be held accountable for that life," she said, in part.

As for Thompson's lawyer, it was clearly not the outcome he wanted.

"I never quarrel with the jury's decision, and I don't. They heard the evidence and they came to a just verdict and we accept that," said attorney Scot Courtney.