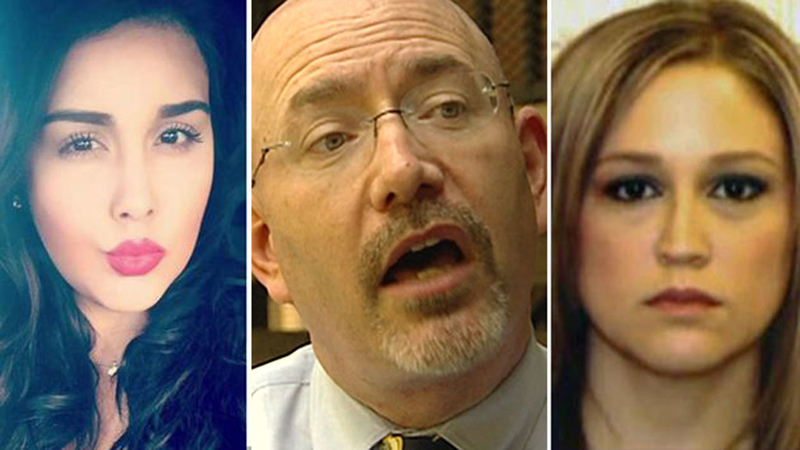 A former high school teacher in Cypress will spend eight years in prison after she admitted to having sex with an underage male student and smoking marijuana with him.

Michelle Schiffer pleaded guilty on Thursday to charges of improper relationship with a student and sex assault of a child. She learned her sentence a short time later.

Court documents reveal Schiffer admitted to the relationship after another student informed school officials of her crimes.

Sadly, this isn't the only recent case of teachers being accused of crimes. Here are 13 others that shocked the Eyewitness News audience:

Former high school teacher accused of having sex with student.

Text messages allegedly chronicled an inappropriate sexual relationship between a 39-year-old culinary arts teacher and his male student. The shocking accusations against Steve Amedeo, 39, came to light after the alleged victim's girlfriend found the text messages on her boyfriend's phone and turned them in to Milby High School officials.

Alexandria Vera was an English teacher at Aldine ISD accused of getting pregnant with a 13-year-old former student she met during summer school. Vera allegedly got close to the boy, even spending holidays with the family who reportedly approved of the relationship. She would eventually terminate their pregnancy.

A soccer coach at Langham Creek High School faces charges after investigators say he had sex with a 17-year-old female player. Juan Toledo allegedly traded inappropriate texts and then escalated his involvement to include meetings for sex with the teen girl.

Investigators say they would meet at motels during their sexual rendezvous.

Police say they found Kelly Aldinger parked inside a car in a cemetery with a 17-year-old boy. She's accused of having a relationship for more than a year with a student she met while working as a substitute at the teen's school.

He was a former teacher of the year at Clear Creek ISD. Now Oscar Perez is charged with the continuous sexual abuse of a child. Allegations surfaced after a girl told police she was in the third grade when Perez touched her genitals during STAAR test tutoring.

Ironically, he told a newspaper reporter in 2009 that students "need to trust you and understand that you are there to help them, and anything they need they can ask you."

James and Charli Parker worked as teachers at the same school, but that isn't all the couple have in common. The district attorney's office says both had separate sexual relationships with one of their students.

It is not known whether the man and wife knew what the other was allegedly up to behind closed doors.

Robert Evan Milton was hired by Katy ISD to teach art, but a student alleges he spent part of one school day telling her how he was unhappy in his marriage and available to date.

When the Katy High School senior and the teacher were caught in a rain shower while taking graduation photos, she says things became intimate as they sought shelter inside his car.

Milton resigned from his position after the allegations surfaced.

A former special education teacher was sentenced Friday to three years in jail for sex acts with five students at Centennial High School in Corona.

Summer Hansen pleaded guilty to 16 sex-related felonies with five underage students, including sending nude photos of herself. The former special ed teacher broke down in tears and apologized. "From the bottom of my heart, everything that I have, I'm not a monster. I made bad choices in life. For that, I am truly, truly sorry," she said.

William Robert Massie, 30, of Katy was arrested after he admitted to having sexual encounters with a student.

A Pasadena ISD elementary teacher is charged with indecency with a child after he allegedly took a photo up a first grade girl's skirt. Luis Pasos, 42, was also accused of being inappropriate with the girl's 14-year-old sister.

Ian James Edgeley was coming home from a trip when he was arrested at a Houston airport. His wife called the cops after she discovered he was allegedly having a relationship with a student at his high school in Round Rock.