'Our scrolls are safe!' Firefighters save sacred Torah scrolls after fire starts during service at synagogue 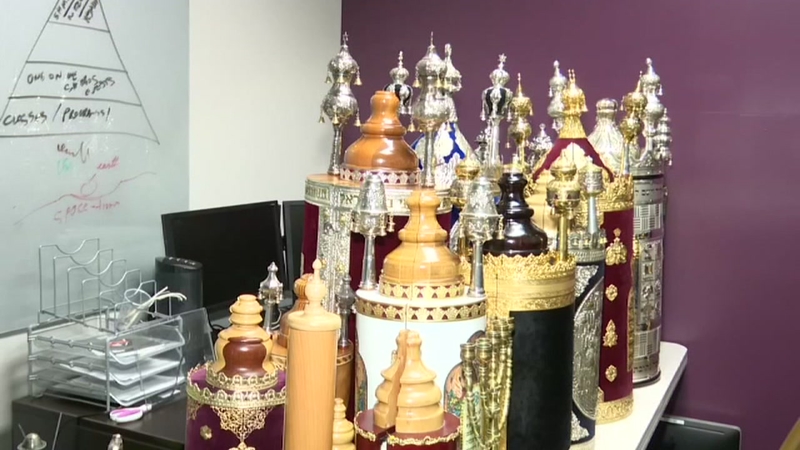 HOUSTON, Texas (KTRK) -- Firefighters managed to save every Torah scroll from a fire that broke out at a synagogue in southwest Houston, three days before the start of Hanukkah.

About 30 worshipers were inside the Congregation Torah Vachesed in the 5900 block of S. Braeswood when the fire started around 9:30 p.m. Wednesday.

One of the rabbis was wrapping up the service when someone came running in about the fire.

"One of our congregants screamed, 'Get out, it's a fire! Everyone get out!'" said Rabbi Avraham Yaghobian.

Initially, some congregants tried to put the fire out themselves for fear of several holy items getting damaged, including scrolls, Yaghobian told Eyewitness News.

"The firefighters with the police, they brought out our holy books and we got to see they're all okay. Again and again and again, I thank God for the miracle that no one was hurt and that no holy article was damaged," said Rabbi Yaghobian. "I really want to thank the firefighters and the police for their bravery, for their sensitivity and their understanding. They were willing to jump in there."

Nearly 300 families worship at the synagogue. Soot and water now cover the floor. The building is not usable.

ABC13 reporter Courtney Fischer has a look at the damage inside a synagogue destroyed by fire.

Next door at the TORCH community center, Rabbi Aryeh Wolbe says they'll welcome all of the congregants temporarily displaced. The Torahs, prayer books and pictures are being stored at TORCH.

The Torah scrolls are the basis of Judaism, which is why some congregants ran into the burning building.

"If the Torah scroll were to fall on the floor or to God forbid get burned, there would be a fasting in the community for 40 days. It's a very significant thing we have in Judaism," said Rabbi Wolbe.

Rabbi Wolbe's wife, Zehava Wolbe, shared moving video with ABC13 that shows the congregation singing as the Torahs were brought outside one by one.

Video shows a look inside the synagogue, where congregants worked to save the sacred Torah scrolls.

Firefighters had a tough time putting out the fire because the roof has multiple layers. Some of it is made of plastic.

While Hannukah plans will change, Rabbi Yaghobian says there will still be a celebration.

"Right now, we don't know what's going to happen, but it's going to be even better I assume in some way," said Rabbi Yaghobian.
.
If you would like to help Torah Vachesed rebuild, click here.

“Our scrolls are safe! Our scrolls live!” FF saved all 11 Torah across from burning synagogue. Investigators are still trying to figure out how the fire started. #abc13 https://t.co/VJUnHtYR4J pic.twitter.com/VluwypYWi4