'It's a miracle:' Wife of injured Sugar Land PD officer asks for prayers for his recovery 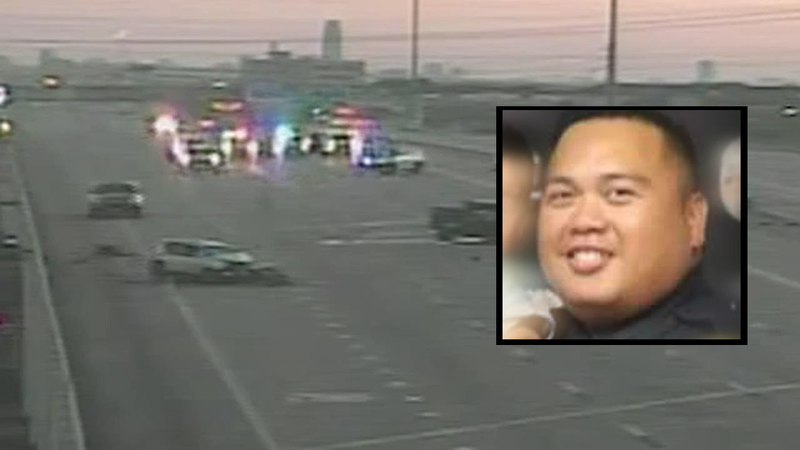 SUGAR LAND, Texas (KTRK) -- A Sugar Land police officer who was injured in a weekend crash involving an alleged drunk driver remains hospitalized but continues to improve, according to his wife.

Phuong Munoz spoke with ABC13 about her husband's recovery. Officer Ruben Munoz was critically injured in a crash on US59 on Sunday, March 20.

"He's doing very well. He's able to talk and joke around and be very vibrant, talk and be with friends," Phuong said. "It's a miracle."

The aftermath of the crash that happened at about 2 a.m. was awful. Daylight revealed Munoz's crushed patrol vehicle. He was sitting inside at impact.

"When at 3 a.m., police came knocking, my heart sank," she said. "No words, just fear basically."

Phuong and the couple's two young children were at home sleeping as Officer Munoz patrolled the streets of Sugar Land. He recently left his job as a police officer in New Jersey so they could be closer to family. Officer Munoz had been on the job just six months when the crash happened.

According to Sugar Land police, 25-year-old Julian Requena was intoxicated when he slammed into the officer's vehicle. Officer Munoz was blocking traffic for a separate traffic scene. He suffered critical injuries to his spine and has undergone two surgeries. Requena has been charged with two counts of intoxication assault.

"I am very appreciative and so grateful for rallying around Ruben for this," Phuong said about the community support.

She adds that her husband is yearning to play with their two children. She asks for prayers for his long recovery but believes plenty have already been answered.

"It's a miracle and you know he was being watched over. So, I don't know what to say. It's just a miracle," she said.

Family friends have set up a GoFundMe to help the family with expenses.

Sugar Land Police Department has provided these ways to help:

- Anyone wishing to send cards, flowers or well wishes, please direct them to the Police Department Administration by reaching out to Linda Myers at lmyers@sugarlandtx.gov or police@sugarlandtx.gov.

- All monetary donations and coordination of meals will be handled by the Sugar Land Police Officer's Association (SLPOA). To work with SLPOA, please reach out to sugarlandpoa@gmail.com.

- The Sugar Land Citizens Police Academy Alumni Association (CPAAA) will also be organizing ways to support our officers in the department. If you would like to contribute your time or money to CPAAA, please send an email to Lt. John Volek at jvolek@sugarlandtx.gov.