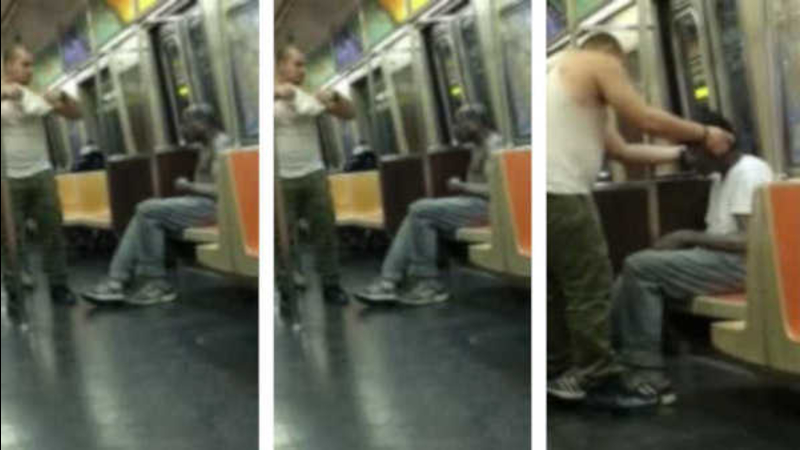 NEW YORK -- It's a story that shows the power and widespread reach of social media. More importantly, cell phone video that has been seen by millions shows the touching, heart-warming generosity that was passed on from one man to another. Now, a man who literally gave the shirt off his back is speaking exclusively with WABC, Eyewitness News in New York.

Joey Resto, 23, has an enormous heart. On Friday night he was on the Downtown A train when he spotted a homeless man in his car. All of the other passengers sat far away because of the odor. Resto, however, sat right in front of the man and immediately he was overcome with compassion.

"It was freezing that night. He looked cold and hungry," said Resto.

Resto took the shirt off his back, and helped dress the man. Then he covered the older man's bruised head with his own hat.

"He looked so weak and frail. I had to help him, or he would not put it on," Resto sad.

What Resto did not know was that another rider videotaped this tender exchange, and posted it on Facebook, where it has gone viral with more than 11 million views.

Annie Martinez, the mother of Resto's girlfriend was pleasantly surprised to recognize him as the Good Samaritan.

"I thought, wonderful thing he did, because we have to help others in need," said Martinez.

"The fact that he gave clothes off his back so they could be warm, I thought was pretty great," said Resto's girlfriend, Yanisleidy Martinez.

Resto says he hopes he inspires others to do acts of kindness. He also says he Invited the homeless man to his apartment in Brooklyn for more clothes. He offered to get him something to eat, but he says the man curled up and went to sleep after the shirt and hat.

Resto is hoping others will help watch over the man and others who are helpless.