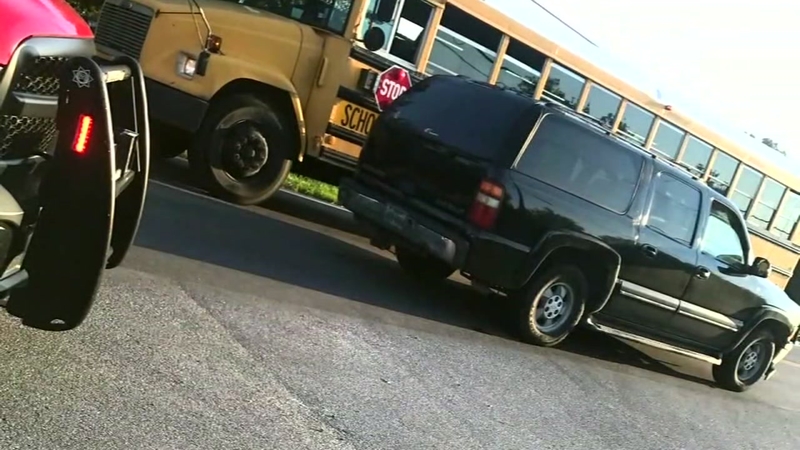 HOUSTON, Texas (KTRK) -- The 25-year-old driver who allegedly ignored a school bus stop sign and hit a student will be ticketed 35 days later.

"I think it is important for law enforcement to receive this message that we had to call social media. We had to call the news to get this message across because they weren't doing their jobs," said the victim Tiffany Alanis.

The 16-year-old junior at Goose Creek Memorial High School says she feels let down by the Harris County Sheriff's Office.

JUST IN: the 25yo driver accused of hitting a @GCCISD student who was walking to her stopped school bus 🚌 will finally be ticketed 35 days later! The victim has a message for @HCSOTexas on @abc13houston at 6pm. pic.twitter.com/qfb6klk9gg

Alanis and her family have spent the last 35 days fighting to get answers after she was hit while trying to board her school bus.

"Just give her the ticket. She passed the school bus and she hit a child. She hit a minor. That's a serious incident," said Alanis' stepfather Jose Flores.

The crash happened at Wallisville Road and Hasty Lane on Sept. 19.

Goose Creek CISD says they have video from inside the bus that shows the other driver passing by the school bus, which had flashing lights and a stop sign engaged.

But the woman behind the wheel of an older model black Suburban was allowed to drive away from the scene without a citation.

Tiffany suffered a concussion, cuts and bruises and was left with a $24,000 hospital bill.

"Put yourself in my shoes. What if that was your daughter?" Flores said.

"I feel a lot better that she's getting a ticket because if she didn't then people wouldn't be respecting the bus. They wouldn't respect the police," said Alanis.

HCSO gave the family a copy of the incident report Wednesday, after telling them they had to spend time changing the original report.

"He said that there were some discrepancies in the report, and that they are fixing it," Flores said.

The sheriff's office says more than a month later, they have finally viewed and requested the video.

We asked them why it took them so long to ticket the driver and to watch the video, and they declined to answer the question.

RELATED: Parents outraged after driver who struck teen trying to board school bus not ticketed