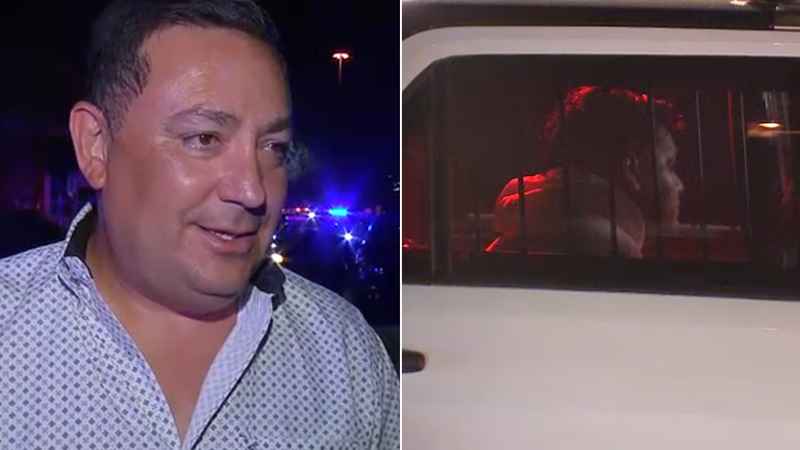 HOUSTON, Texas (KTRK) -- Houston police chief Art Acevedo is never off-duty. He proved that late Thursday night as he was on his way home when he says a pair of street racers passed him on I-10 speeding more than 100 miles an hour.

Acevedo, who was in his plainclothes, spotted them around I-10 and Washington around 11 p.m.

He said he saw a Dodge Charger pass by him at more than 100 miles an hour and then a white Mercedes went by at the same speed. He also said they were cutting people off in traffic.

Acevedo called into dispatch for back up.

"I'm trying to overtake a Dodge Charger... looks like a green Dodge Charger and a white Mercedes Benz, both eastbound on I-10 approaching Yale, at about 110. Can you see if there are any units east of me?" the chief asked on the radio.

Acevedo asked for the HPD helicopter as he followed the Mercedes, which exited I-45 and started running red lights.

"Did you just say HPD 1 is in a chase?" the dispatcher asked.

"Yes, I did," another officer responded.

The chase finally ended at Bagby near Dallas in downtown Houston.

According to the chief, the Mercedes driver told him he saw the other car going 100 miles an hour and wanted to see what his car could do.

"They watch 'The Fast and the Furious.' They don't realize that's Hollywood, this is real life. We're having way too many people die on our highways. We can't put up with reckless behavior," Acevedo said.

The Dodge Charger exited at Studemont, but it doesn't appear that person has been caught.

The 21-year-old Mercedes driver was arrested on a misdemeanor charge of reckless driving, and his car was impounded.

The chief says he wants everyone who street races to understand that's what will happen if you get caught, and you never know who you are passing as you speed down the road.

Also because of incidents like these, HPD is cracking down on street racers. On Saturday, the department made several arrests.

Sean Teare, who is the chief vehicular crimes prosecutor in the Harris County District Attorney's Office, said encountering street racers, like the ones that Acevedo came across, isn't as rare as one would think it is.

"Anybody who travels on Houston roadways knows this happens all the time," said Teare. "When you see one person blow by, you know there's at least one person behind them."

The consequences can be deadly, but it was disrupted by, of all people, a police chief.

Teare said he intends to prosecute this case to the fullest extent.

"Rest assured, I'm going to try it, because I can't wait to call Chief Acevedo to the stand and watch him testify because he's great in front of a camera," Teare said.