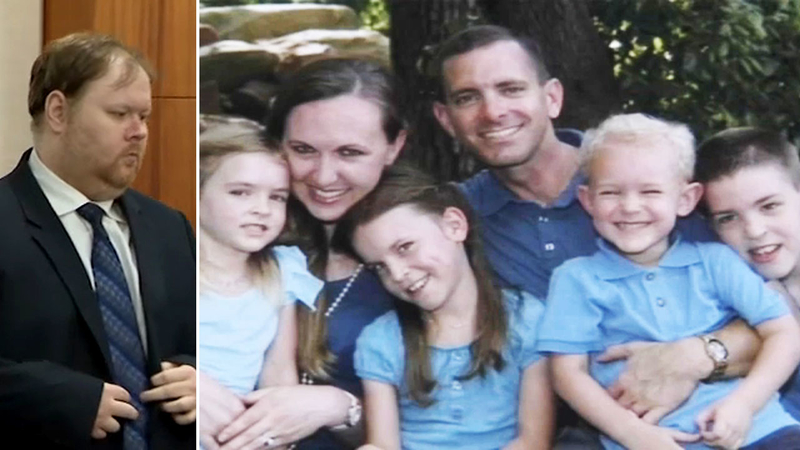 HOUSTON, Texas (KTRK) -- A man convicted of capital murder in an attack in which he fatally shot six members of his ex-wife's family in Texas has been sentenced to death.

Jurors concluded that Ronald Haskell Jr. should die by lethal injection in the 2014 massacre, which included the execution-style killings of four small children.

Immediately after the sentencing, Cassidy Stay, who was shot by Haskell but played dead as her parents and siblings were killed one by one, took the stand and addressed his family's killer directly. She said she no longer worries whether he'll have remorse for his actions.

"I hope that when you die, you will get the punishment you deserve from God," Cassidy told Haskell.

Earlier Friday, prosecutor Samantha Knecht said during closing arguments in the punishment phase of Ronald Lee Haskell's trial that "this is the moment for justice" for his victims.

As she talked to jurors, Knecht placed bullet casings for each of the six victims in front of the jury and more than 20 bullets for other family members that Knecht said Haskell also wanted to kill.

The same jury convicted Haskell on Sept. 26 in the deaths of Stephen and Katie Stay at their suburban Houston home, rejecting his attorneys' efforts to have him found not guilty by reason of insanity.

Haskell also killed four of the couple's children in the 2014 attack, and he shot a fifth child, 15-year-old Cassidy Stay, but she survived by playing dead.

Cassidy Stay, now 20, testified at trial that Haskell forced her family to the floor in the living room and shot them one by one. She said she prayed and begged her uncle "please don't hurt us," before Haskell opened fire.

Jurors had only two sentencing choices: death or life in prison without the possibility of parole.

Neal Davis III said Friday that the 39-year-old man should spend the rest of his life thinking about what he has done and "die in prison." Doug Durham told jurors that at the heart of prosecutors' arguments for a death sentence is "anger, hatred, fear, vengeance because of this terrible, terrible crime."

To impose a death sentence, jurors had to find Haskell would be a future danger to society and that any mitigating factors - such as mental illness - were insufficient to merit a lesser sentence.

Haskell's attorneys said he suffered from various mental illnesses and that voices had told him to kill his ex-wife's family.

At closings, prosecutors called Haskell a manipulator and a liar. In earlier proceedings, they produced expert witnesses who testified that Haskell did not have a severe mental illness and had faked his symptoms. They said he meticulously crafted a plan to hurt anybody who helped his ex-wife, Melannie Lyon, after the couple divorced, traveling from California to Texas to carry out the killings.

Prosecutors only needed to charge Haskell with two of the deaths to get to capital murder. In cases with multiple murders, it is a common trial strategy for prosecutors to not charge the deaths all at once in case legal issues arise and new indictments are needed.

After the shooting, he reloaded his gun and headed to the homes of Lyon's parents and brother so, according to prosecutors, he could complete his vengeful plan. He was arrested before reaching any other homes.

During the trial's punishment phase, relatives of the Stays told jurors how their lives were devastated by the killings.

Haskell's brother testified that his sibling "still has good in him."