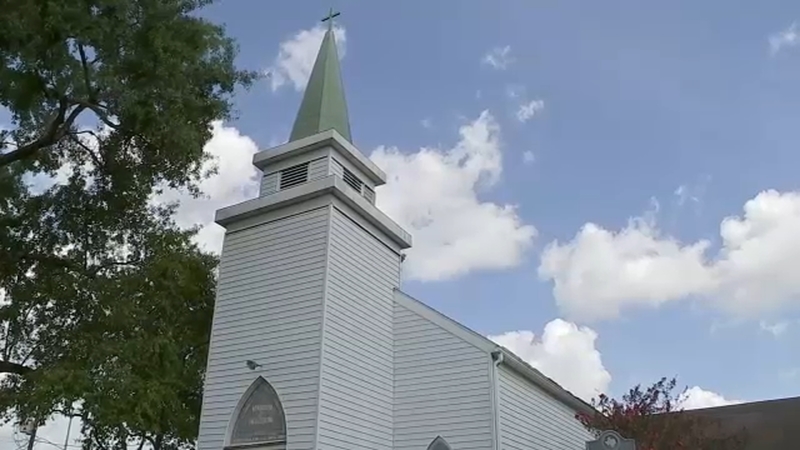 HOUSTON, Texas (KTRK) -- On Long Point Road, cars pass by a church, with most of them likely unaware of the role it's played in the history of Spring Branch.

St. Peter United Church is nearly 170 years old, founded before the Civil War and 15 years after Houston was founded on the banks of Buffalo Bayou.

The pioneers of Spring Branch were German immigrants, who settled in an area where a spring-fed creek met Buffalo Bayou. In 1850, a congregation was founded. Their first act was to establish a cemetery next to what would be their church.

A fire claimed the original structure. A few years later, another was built and it stands on the same site today, next to a more modern sanctuary.

"I sat in that pew," said 84-year-old Evelyn Kingsbury. "I sat in between my grandparents, and they were very strict. They were German."

In recent years, the congregation dwindled to an unsustainable level. About that time, Cathedral of Hope United in Houston was looking for a home and partnered with the congregation.

On Jan. 1, the two congregations united. The name of the church remains St. Peter. Now the congregation is multi-cultural, and while they may have different views on things, they are on the same page with their faith.

"We reach out to everyone regardless of race, denomination or sexual orientation. We're very diverse now," the pastor said.

Kingsbury loves the church, as she has for nearly all her 84 years.

"The people are wonderful," she said. "I wouldn't go anywhere else."

She went through confirmation in the church as a child, as did her own children.

"My husband is buried in the cemetery next door," Kingsbury added.

Pastor Jackson said he isn't trying to reinvent the place.

"It has a history and we recognize that." The congregation he brought in trends younger. "We have a lot of different cultures, we're not afraid to do a German festival in November. We're going to do that."

Call it local history that will be remembered and celebrated.