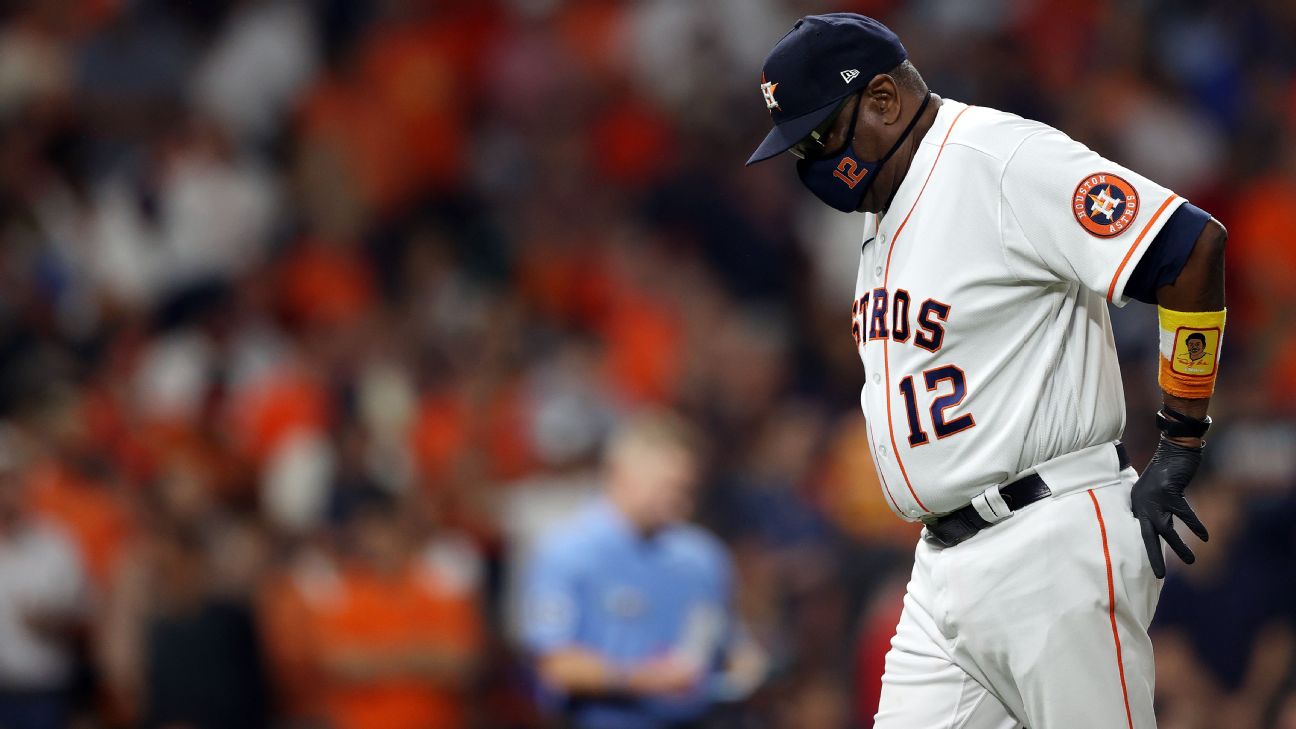 HOUSTON -- When the final out was recorded in Game 6 of the 2021 World Series, Dusty Baker's 24th year as a big league manager ended in the same way as the previous 23 -- with another team winning the season's last game.

Afterward, the Houston Astros' manager sat in the dugout and took a moment to jot down one more note on the pad in front of him. He capped his pen, allowed himself to look up just long enough to see the Braves leap into each other's arms on his field, and then ducked into the tunnel and headed for the clubhouse.


He has seen too much to feel the need to marinate in disappointment. Watching another team celebrate, even as a motivational exercise, lost its appeal long ago.

So much of what happens in a baseball game is beyond the control of the manager. Baker has no say as to whether Luis Garcia's full-count slider to Jorge Soler in the third inning backs up toward his bat or behaves as it is supposed to. He can't will Cristian Javier's fastball to Dansby Swanson in the fifth inning to dip low and away instead of traveling over the center of the plate, belt-high, where it was rudely transformed into a two-run homer. It's not within his power to compel the guys he has relied upon all season to keep hitting just because it's the World Series.

But Dusty Baker Jr. has never subscribed to the theory of the powerless manager. He believes in omens. He believes positive energy can be passed around. He believes that a baseball team, like a school of fish, can learn to turn as one without precisely understanding why.

He moves around the dugout, from one end to the other, as a means of altering his team's mojo. When it works, he swears by it. When it doesn't, he ignores it. He is baseball's dugout mystic, and everything he sees is as real to him as it is invisible to the rest of us.

"I'm a person who believes in miracles," he said. "I really believe in miracles. I've had a few of them happen to me. Some health issues, some fast cars I don't know how I got out of without having an accident. There have been a number of issues in my life that let me know there's somebody above helping us."

But along with the miracles come the trials, and winning the World Series has become Baker's 40 days in the desert. He is the only manager to take five different teams to the postseason, but his only other World Series team -- the 2002 Giants -- lost to the Angels in seven games. When he was first named manager of the Giants in 1993, he used to say that his goal was to make the Hall of Fame as a manager because his playing career, while memorable, was not Hall of Fame caliber. Now, 28 years, 24 managerial seasons and 1,983 wins later, a World Series win is the only empty box on his résumé.

Perhaps sensing the people in the room might be among those people, Baker said, "It's OK. We'll be back."

There is no guarantee, though. He is without a contract, and despite Baker and management professing a desire to make it happen, it might not. Baker is an energetic 72, but Astros bench coach Joe Espada, 46, is well-regarded throughout baseball; he's considered ready to manage, either in Houston or elsewhere, in 2022.


"I hope Dusty's back," said Astros shortstop Carlos Correa, himself a free agent who spoke after the game like someone who doesn't expect to be back. "He's a great manager, great person. Loved playing for him. I loved every single second."

BAKER HAS BEEN through a lot: the manufactured controversy of handing Russ Ortiz the ball in Game 5 of the 2002 World Series and then removing him with a 5-0 lead; the NLCS/Bartman fiasco in Chicago; the image rehabilitation he conducted with these Astros after taking over in 2020 in the wake of the team's sign-stealing scandal that cast considerable doubt on their 2017 World Series win.

It was an ingenious move: bring in a universally respected and well-liked man and let his charisma deodorize the franchise. But that didn't make it an easy job. Baker was tasked with keeping a talented roster from disappearing into the clouds of boos and vitriol that followed them around the country. He took them to the ALCS last year, a win away from the World Series, and this year he won the American League pennant. But perhaps Baker's worth can be measured by the fact that for many, he was the only reason rooting against the Astros gave them pause. He became an ethical dilemma in human form.

"He's a great one," Correa said. "I think what's special about Dusty is he's the manager, but you also see him as a friend. He has our back; we have his back."

It's a sentiment that's shared far beyond the walls of the clubhouse. During baseball's second straight impersonal postseason, with COVID-19 restricting access to an interview room that served as a feedlot, Baker treated every conversation with any person who asked him a question in a news conference as if they were the only two people in the room. In one late-series instance, a reporter asked a question that received a quizzical look from Baker. She acknowledged it was weird, to which Baker replied, "I'm trying to get weird with you."

At one point he summoned the wisdom of Japanese baseball legend Sadaharu Oh -- much as he has, over the years, summoned the wisdom of such diverse philosophers as actor Scatman Crothers and musician John Coltrane. Baker said that Oh once told him, "You have to have a burning desire to succeed in your heart, but the coolness of mind to control your heart."

He can offer his own original philosophy, as you might imagine. Before Game 6, in response to a question about the youth on the Astros' roster, he said, "No matter how old you are or how young you are, this is a man's game, and you've got to play it like a man."

As Game 6 progressed, the trials began early. When Soler's three-run homer cleared the wall and then the stadium in the third inning to give the Braves a 3-0 lead, Baker stood up and reacted angrily. Even with a mask, the cadence of his head bobs were easily recognizable as a common three-syllable burst of disgust. (This was an ongoing theme of a mostly themeless series, this expressive man shielding the world from his expressions.) From that point on, Baker spent most of the night crouched in the corner of the dugout, his vantage point roughly three feet above the playing field, a man all by himself in a massive crowd.

After Swanson hit his two-run homer against Javier in the fifth to make it 5-0, Baker walked to the mound -- the former ballplayer's light feet and forward lean still evident at 72. He took the ball, slapped Javier twice on the shoulder, flipped the ball into the air and caught it with his latex-gloved hand and waited for Blake Taylor. When Taylor got there, Baker punched the ball into the left-hander's glove, slapped him on the back of the thigh and headed back.

He was back out there three batters later, to take the ball from Taylor, who had allowed an RBI double to Freddie Freeman, and give it to Phil Maton. The ceremonial transfer from Taylor to Baker to Maton was far more restrained. No shoulder slaps, no ball flip, no thigh slap. All that remained was the vigorous placement of the ball into the glove as confidence gave way to resignation.


"I feel terrible because I'm not really ready to go home," Baker said. "I haven't been home [to Northern California] since I left in February, so you know I must love these guys and love what I'm doing."

CANDLESTICK PARK, 1993,Baker was sitting in his office early in his first year as a big league manager. Some sad country song was moaning its way through the clubhouse on a groggy Sunday morning, and Baker stopped midsentence and lifted his head like he smelled something rotting in the other room. "Give me a minute," he told those of us in his office. "I've got to take care of something."

He walked out and stood in the clubhouse, the sad strains of poor choices and broken-down pickup trucks reaching into his soul. "What is that?" he asked, and then answered his own question. "I'll tell you what it ain't -- it ain't hittin' music."

With that, he made his way to the place where the music got changed, and within seconds Bob Marley was asking the room if it could be loved and Dusty was walking back to his office, a smile on his face, his feet keeping time with the beat.

Are stories like that simply loveable folklore, or do they stand for something more? Do they accumulate to the point where they become something resembling an identity? Is cool transferable? The Giants lost 90 games the year before Baker took over. They added Barry Bonds and won 103 in '93, but they didn't make the playoffs. It'll never happen again. The next time baseball had a postseason, in 1995, the wild card was in place. For Baker, it's always something.

"What can you do, except go home, take a shower, figure out how you're going to come back and win it next year?" he said after Tuesday's Game 6. "Look, last year we got one game short of the World Series, and this year we were two games short of the championship. So I guess that's progress."

He didn't sound totally convinced. He has seen too much to draw solace from the good try. On Sunday, with his team down three games to one and Game 5 a few hours away, he was asked whether he was disappointed with the situation: on the brink of elimination, his team struggling to find its way, 19 years after his only other World Series as a manager.

His other World Series loss was followed by the immediate loss of his job, so he's had that trial, too. Will he get one more chance to chase away the disappointment? On Tuesday night, in the gloom of the moment, the answer was like so much else inherent to his occupation: completely out of his control. 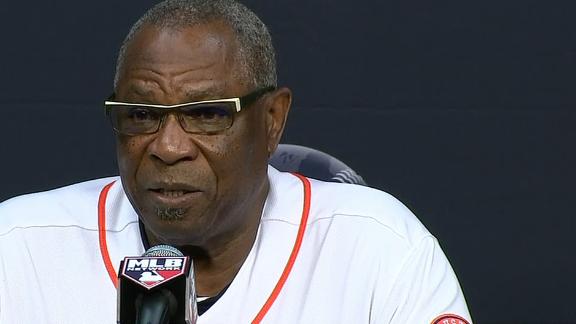