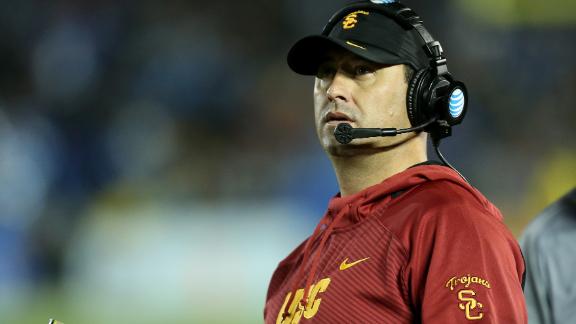 LOS ANGELES -- USC, in a formal response to Steve Sarkisian's wrongful termination lawsuit filed last month, has claimed the suit violates an arbitration agreement the former coach had with the school and has taken aim at the accuracy of his claims, calling them "half-truths and, in many cases, outright falsehoods."

The response was filed Wednesday in Los Angeles Superior Court and obtained by ESPN.com.

Sarkisian, 41, was fired Oct. 12, a day after being asked to take an indefinite leave of absence after he arrived to team facilities while, according to sources, appearing to be intoxicated.

Before the season, Sarkisian issued a public apology after an incident at the school's Salute to Troy booster event, at which Sarkisian slurred his words and used profanity while addressing a large group of people, including players, fans and coaches.

Sarkisian's lawsuit, in which he is seeking $30 million, said he suffers from alcoholism and "at all relevant times, [USC] knew of Steve Sarkisian's alcoholism," but the school's response disputed that claim.

At a news conference in the wake of the Salute to Troy event, Sarkisian explained his actions were a result of mixing alcohol with prescription medication. When asked whether he had a drinking problem, Sarkisian said: "No, I don't believe so, but through [athletic director Pat Haden] and through the university, I'm going to find that out. I'm going to go to treatment."

It is unclear what steps Sarkisian took to address the issue.

USC disagreed with the lawsuit's claim that Sarkisian was fired, in part, "because he was no longer satisfying the win-loss expectations of USC and its trustees."

The Trojans were 3-2 when Sarkisian was fired.

"The truth is that Sarkisian was entrusted to coach, lead and mentor a team of young adults to perform on and off the field, and that he had the full support of the University," USC's response states. "Despite multiple opportunities, he still could not perform basic job responsibilities, including showing up for practice or speaking events, and set a poor example to the students he was supposed to be coaching."

USC disagreed with this claim, too.

"It is absolutely false that Dr. Robin Scholefield, a sports psychologist, ever treated, counseled or prescribed medication to Sarkisian," the response states. "The truth is that Dr. Scholefield only treats students (primarily student-athletes) and referred Sarkisian to two psychiatrists who were treating Sarkisian in their private practice for issues related to his anxiety and stress."

When Sarkisian was hired in December 2013, he signed two identical agreements with USC in which he agreed to resolve termination claims through arbitration, one for his $2.5 million-a-year coaching contract, the other for his $1 million-a-year marketing agreement paid to Sark Enterprises Inc.

The agreements, in part, state: "Any claim that otherwise would have been decidable in a court of law -- whether under local, state or federal law -- will instead be decided by arbitration, except as specifically excluded by this Agreement."

It specifically includes claims for discrimination or harassment related to a medical condition or disability.

"Plaintiffs should not be allowed," USC's response states, "to use the judicial system as a bully pulpit in an attempt to litigate this case through the press, and spread misinformation in the process, rather than through the arbitral forum to which all parties agreed."

Asked to comment on USC's response, Alan Loewinsohn, a lawyer for Sarkisian, said in email to ESPN.com:

"Rather than just make broad sweeping conclusions, we filed a very detailed 31-page complaint that sets out much of the factual basis for Coach Sarkisian's claims. We are anxious to have our day in Court. We remain confident that when the matter is tried the truth of those detailed allegations will be confirmed."

According to Sarkisian's lawsuit, he is sober after completing a rehabilitation program and is ready to return to coaching.

In recent days, Sarkisian has put out feelers to NFL teams expressing an interest to return to coaching as a quarterbacks coach or an offensive coordinator, league sources told ESPN NFL Insider Adam Schefter.