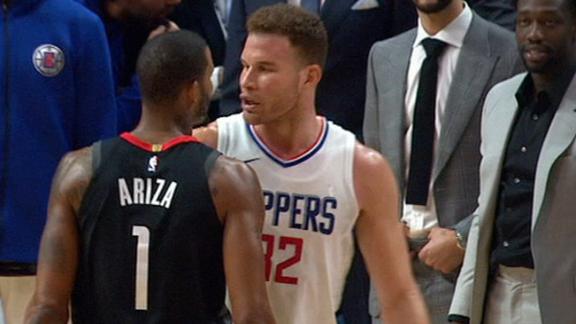 Rockets playersChris Paul and James Harden will not face discipline or fines for their "peacemaker" roles, the NBA said.

On the Clippers' side, Blake Griffin also will not face a penalty for the contact he was accused of making with Rockets coach Mike D'Antoni, or for his role in the on-court conflicts during the game for which he was ejected late in the fourth quarter.

"They entered the Clipper locker room in order to confront some or one of the Clippers, confront their opponent," NBA vice president of basketball operations Kiki VanDeWeghe told ESPN on Wednesday afternoon. "With circumstances like this -- it was chippy. These were two teams who really went at it. To go into another team's locker room immediately after a game, totally inappropriate and very provocative for the players to do that, and so that's a dangerous situation. It really is."

The NBA interviewed more than 20 people and found that Ariza and Green aggressively tried to enter the Clippers' locker room, and that Paul and Harden were attempting to de-escalate the conflict.

"We interviewed a lot of people from both sides. Both those guys were peacemakers," VanDeWeghe said of Paul and Harden. "Both of them tried to diffuse the situation out in the hall. They were trying to get ... their teammates out of the locker room. They were both in that vein. And that came from both sides. We feel comfortable that was their role and as such there wouldn't be any penalty."

Clippers coach Doc Rivers spoke about the suspensions before Wednesday's game against the Nuggets.

"We don't have a lot to do with it. That's the league's stuff. So ... I always say, it's an emotional game," Rivers said. "And I bet I've had 50 people say, 'what was the rationale, there wasn't any rationale there.'When you lose your cool, you're not there rationally. I'm glad it didn't get any worse, and it could have. It could have been an ugly scene, and fortunately, it didn't happen."

But Rivers said he didn't agree on the suspensions.

"Honestly, you know where I stand on suspensions. I don't really like them. You know, I've said that before," Rivers said. "So I'm not going to go back on that. I don't like anybody missing games. I mean, it's funny, we complain about guys missing games due to rest and the fans want to see those games. We do the same thing when we suspend guys."

Ariza and Harden had earlier in the day issued denials regarding the reported details of the incident.

"Half of those players in that locker room were on our team last year," Ariza said. "Everybody is pretty friendly. I'm pretty friendly with people that I know. People I don't know, I don't really talk to.

Harden, who the Rockets are planning on welcoming back to game action on Thursday after he missed seven contests because of a hamstring injury, called the reports inaccurate.

"You have reports -- I don't know who -- different stories, I guess, are their opinions," Harden said. "Ninety-nine percent of them are false. We'll leave it at that. Me, I'm focused on being with the guys and excited to have a chance to be back tomorrow."

League sources told ESPN late Monday night that Ariza, Green, Paul and Harden marched through a back corridor and into the Clippers' home locker room at the Staples Center, suggesting that they wanted to confront Clippers playersAustin Riversand Griffin after a contentious loss.

Stunned Clippers players, celebrating a 113-102 victory, leaped to their feet upon the realization that four seething Rockets players had come calling for them, sources told ESPN.

For a few fleeting moments, several Clippers dared the Rockets to come farther into the room, sources said. Security and team officials soon converged on the Rockets, pushing them out the door and back toward the visitors locker room, sources said. Ariza was described as the first one through the door, with Paul lingering in the back, witnesses told ESPN.

Sources told ESPN's Ramona Shelburne that Rivers and Ariza had a conversation soon after the incident Monday night to resolve their differences. There has been no resolution between Rivers and Paul, however, sources said.

NBA officials started an investigation immediately after Monday night's game and continued gathering information from among the Clippers, Rockets and security officials on Tuesday.

D'Antoni accused Griffin of intentionally making contact with him moments before a heated confrontation that led to double technical fouls. The confrontation occurred in front of the Houston bench with 3:34 remaining in the contest.

"You mean after he hit me? I didn't appreciate it," D'Antoni said.

D'Antoni was arguing with a referee about a goaltending non-call on the previous possession when Griffin veered toward him and made contact.

"We spent a fair amount of time reviewing that from all the different angles," VanDeWeghe said. "At the end of the day, the contact was really minimal. We decided it was not deserving of a penalty."

Griffin, who finished Monday's game with 29 points, 10 rebounds and six assists, was ejected with 1:03 remaining in the fourth quarter when he drew his second technical foul for a confrontation with Ariza. Griffin joked that the conversation was about whether he would attend Ariza's birthday party.

"It was just heated in the moment, that's all," said Ariza, who also was ejected. "I didn't hear him. I just see somebody coming to me aggressively, so I'm going to defend myself."

As D'Antoni added, "Boys will be boys. It got a little heated. Whatever."

Information from ESPN's Tim MacMahon and Bobby Marks was used in this report.

Ariza and Green to serve 2 game suspension for entering Clippers locker room
ESPN NBA Insider Adrian Wojnarowski reports that only Trevor Ariza and Gerald Green will be disciplined for the squabble between the Rockets and the Clippers on Monday night.