Three reasons the Astros and Red Sox will win in ALDS 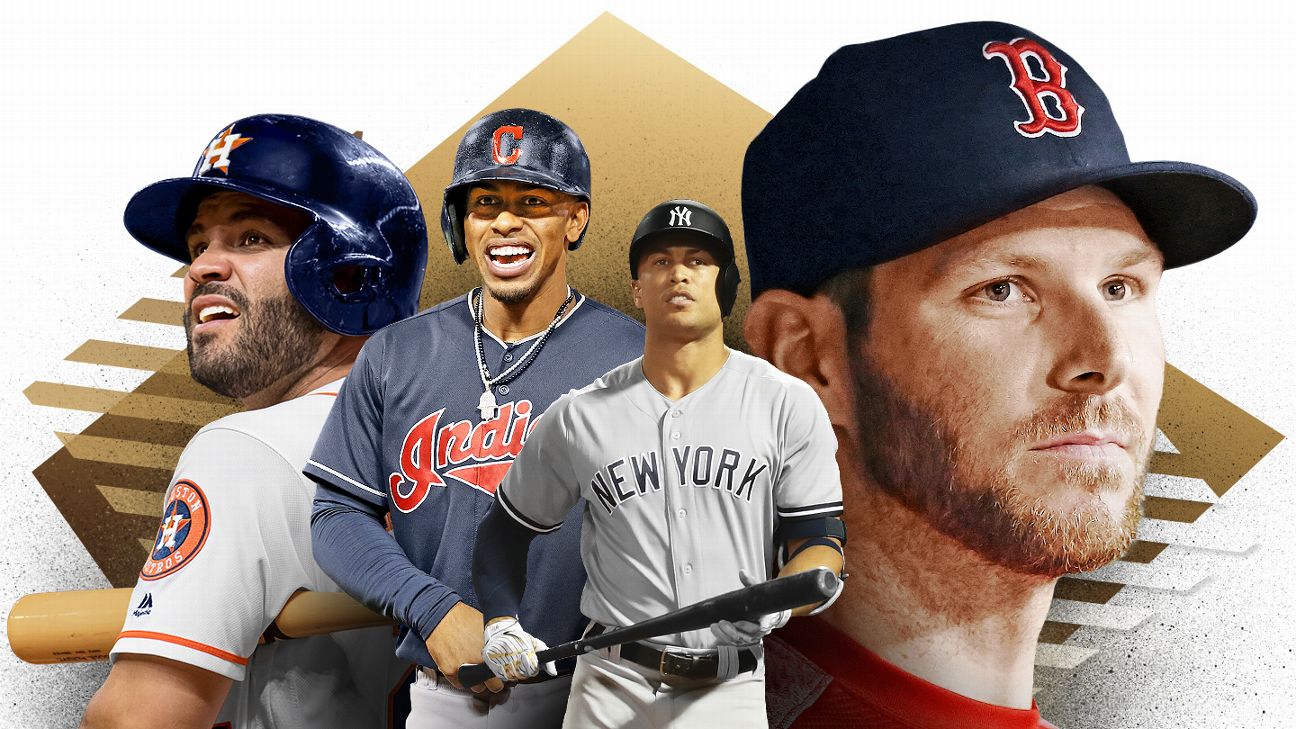 The American League Division Series pits the Houston Astros against the Cleveland Indians and the Boston Red Sox versus the New York Yankees. Here's Tim Kurkjian's pick for each series, with three reasons why that team will win -- and one reason why they might not.

Three reasons the Astros will beat the Indians

This series is so good, so competitive, it deserves to be a seven-game series. But it will be even better as a five-game series because it will add even more pressure to every out and every pitch. And there is so much riding on it here: The Indians haven't won the World Series in 70 years, and the Astros are trying to become the first team to repeat as the World Series champion since the 1999-2000 Yankees.

1.The Astros' pitching is spectacular.The Astros led the league in ERA by more than a half-run per game. They recorded more strikeouts this season than any team in major league history. Their starting pitching, which was historically good the first few months of the season, remains the best in the game. Justin Verlander, a Cy Young contender, was brilliant in the postseason last season, but he has struggled in his career against the Indians: He didn't pitch against them this year, but over the past four seasons, he had a 6.05 ERA with 109 hits allowed in 90 innings. Gerrit Cole and Verlander joined Randy Johnson and Curt Schilling (2001-02) as the only teammates in history to finish a season with 275 strikeouts. If Charlie Morton's inflamed shoulder is indeed OK, that's three potential lockdown right-handers. If Morton isn't right, Lance McCullers or Dallas Keuchel could start. Having five starters that good is what Earl Weaver used to call "deep depth."

2. Houston won a club record 103 games this season.They were 21-6 in September, the best record in the game. They have gotten healthier, although shortstop Carlos Correa's back issues are real, and are keeping him from being the great player that he is. But third baseman Alex Bregman has emerged as a star, an MVP candidate who seems to be his best at the biggest times. That Houston offense, which was devastating last year, hasn't been that way this year, but now that it's a little healthier, it's possible the band gets back together.

3.The Astros' bullpen was a mess in the World Series last year with the erratic work of then-closer Ken Giles, yet they won in seven games over the Dodgers.They won, in part, because McCullers and Morton were brilliant in relief, and now the Astros will likely have McCullers and Keuchel available for relief in this series. Controversial closer Roberto Osuna has been great since being acquired by the Astros in July. With all the talk, all of it warranted, about the Yankees' and A's bullpens, the Astros led the AL in bullpen ERA.

One reason I will be completely wrong

The Indians can pitch, too.They are the only team in major league history to have four pitchers with 200 strikeouts. They have five pitchers with a 10-strikeout game. They have 30 individual 10-strikeout games (so do the Astros); only the 1973 Angels and 2001 Diamondbacks had more in major league history. Corey Kluber, a Cy Young candidate, can match up with any pitcher in the game, especially Verlander, who, again, has labored against the Indians in recent years. Carlos Carrasco has two 14-strikeout games this year; his stuff is as good as almost anyone's. Mike Clevinger has emerged as a top-flight starter. And Trevor Bauer, who was a serious contender for the Cy Young until he injured his shin in August, likely will be used out of the bullpen in this series. Plus, the Indians' bullpen, with a healthy Andrew Miller, is formidable, and it has three left-handers with Miller, Oliver Perez and closer Brad Hand. That pitching staff doesn't have to be perfect because the Indians' lineup is dangerous. And that pitching staff will be bolstered by an improved defense with Jose Ramirez at second base, and new third baseman Josh Donaldson, whose injured calf clearly has healed.

Three reasons the Red Sox will beat the Yankees

In the gloriously rich history of the Yankees-Red Sox rivalry, this is the first season that each of these teams won 100 games. Their season series was close (10-9 Boston) and now they meet in the division series for the first time, and in the postseason for the first time since 2004, when the Red Sox came from down 3-0 to win the ALCS, then went on to win their first World Series since 1918. Two teams, each good enough to win the World Series, yet one is going home with three more losses. That pressure, plus the remarkable star power on both teams, makes this a great series, maybe one for the ages.

1.Their lineup is ridiculous.The Red Sox led the major leagues in runs, OPS, slugging, on-base percentage and several other categories. "You can pitch to the Yankee lineup, you can pitch to [Giancarlo] Stanton, but you can't pitch to the Red Sox's lineup," said one American League manager. Rays manager Kevin Cash said, "That Boston lineup is just relentless. It just keeps coming at you."Mookie Betts is going to win the AL MVP, and J.D. Martinez is a hitting machine. "Every day J.D. comes in the clubhouse, he tells you what his hitting plan is for that night," Betts said. "I've never seen anything like it." But the Yankees feel they have at least one answer in J.A. Happ, who has been really good against Boston. The Yankees' pitching, overall, hasn't had many answers at Fenway this year -- 3-7 record, 6.80 ERA.

2.Chris Sale. There is concern, rightfully so, that Sale has not pitched regularly for more than two months due to shoulder inflammation. There is concern, and rightfully so, about his velocity. But there is another way to look at this. Sale should be more rested and stronger than he was at this time last year when he threw 9 innings against the Astros in the playoffs, allowed 13 hits and four home runs. The Red Sox were patient in bringing him back -- it was all calculated for him to be at his best. This guy is different -- he doesn't care about winning the Cy Young, he only cares about winning. The gut feeling here is, despite lots of evidence to the contrary, he is going to be great this October. He will have to be if the Red Sox are to win this series. David Price and Rick Porcello also need to be good. Together, those three are 0-11 with a 6.18 ERA in 14 postseason starts.

3.Bullpen and bench. Former manager Davey Johnson used to say that that is how teams win in the postseason. The Red Sox bench is loaded. They have pop with Steve Pearce, who will start against left-handers, and on those days, Mitch Moreland provides production off the bench. They have jack-of-all-trade guys such as Brock Holt and Eduardo Nunez, who can play multiple positions. Granted, their bullpen is shaky in the middle innings, but starter Nathan Eovaldi, acquired at the trade deadline, can handle some of the duties to bring the game to closer Craig Kimbrel. "[Eovaldi] can throw 97 [mph] wherever and whenever you need him,'' Cora said.

One reason I will be completely wrong

The Yankees are loaded. This might be the best they've played since their torrid start to the season. Their ceiling is as high as any team's in the game, especially when they are all swinging well. The Yankees hit more homers than any team in history, they are the only team ever to get 20 homers from all nine spots in the batting order and the only team to ever have 12 guys with at least 10 homers. Their bullpen is as dominant as any in baseball now that Aroldis Chapman is back from a knee injury. If the Yankees were to get one game at Fenway Park, then come home, that could change the look of this series. One Yankees player said late in the season, "If we get past the A's, we're going to beat the Red Sox."