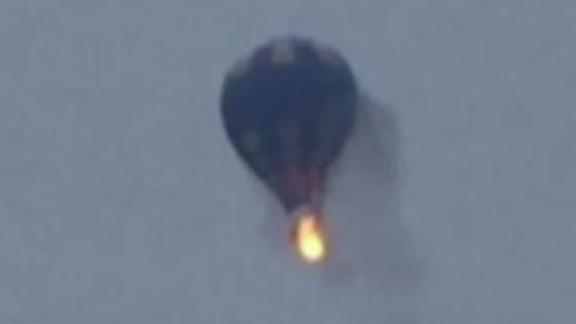 ESPN
DOSWELL, Va. -- A University of Richmond women's basketball assistant coach and team staff member were the passengers aboard a hot air balloon that drifted into a power line, burst into flames and crashed in Virginia.

University administrators said in a news release that associate head coach Ginny Doyle and director of basketball operations Natalie Lewis were two of the three people aboard the balloon that crashed Friday night.

Investigators say the remains of two people were found about a mile apart in dense woods, and the search continued for the third body.

Doyle was feared dead, her sister told the Washington Post, but she added that the family had not been notified if her body was one of the two recovered.

"Words cannot begin to express our sorrow,'' Keith Gill, the school's athletic director, said in a news release. "We are all stunned by the tragic news. Our thoughts and prayers go out to their loved ones.''

More than 100 searchers spent Saturday scouring the woods and fields around the crash site for the third victim and any remnants of the balloon. The search was scaled back as darkness approached but was set to resume Sunday.

Donald Kirk said Sunday that his son, Daniel T. Kirk, was at the controls of the balloon when it drifted into a power line, burst into flames and fell into a heavily wooded area about 25 miles north of Richmond.

His company's website said that Kirk had more than 20 years' experience as a hot air balloon pilot. The website says Kirk had a commercial balloon pilot license issued by the Federal Aviation Administration and had flown in ballooning events throughout the country.

Investigators have declined to say whose remains had already been found.

Lewis just completed her second year as director of basketball operations for the women's team, according to a profile on the university's website. The Buffalo, New York, native was a four-year letter winner and a two-time captain of the Spiders' swim team.

A spokeswoman for Lewis' family, Julie Snyder, called Lewis "an amazing person and a strong person, an athlete engaged to be married.''

Doyle, who graduated from Richmond in 1992 after a standout basketball career, served on the team staff for 16 years after that -- including nine winning seasons and an at-large berth in the 2005 NCAA tournament. She earned all-conference honors twice as a player.

Doyle gained national attention when she set the NCAA Division I record for consecutive made free throws at 66 her senior season (1991-92). The record stood until being broken by Bowling Green's Lauren Prochaska, who made 70 consecutive free throws in the 2010-11 season. Doyle had served on the Spiders' staff for 16 years, helping the Spiders to an at-large berth in the 2005 NCAA tournament.

"As alumnae, classmates, and colleagues -- and as invaluable and devoted mentors for our student-athletes -- Ginny and Natalie have been beloved members of our community,'' university president Edward L. Ayers said in the news release.

The university canceled two weekend baseball games and held a moment of silence at commencement Saturday for its law school.

Witnesses to the crash described a harrowing sight on the special preview night for the Mid-Atlantic Balloon Festival, which was set to open Saturday. The festival was canceled. About 740 people attended the preview event.

On the ground, "It was complete silence," eyewitness Nancy Johnson said. "There were people praying. It was horrible."

The balloon was among 13 that lifted off Friday night from Meadow Event Park, home to the State Fair of Virginia, and was approaching a landing site nearby. Two of the balloons landed safely before the third hit the live power line, according to police.

The pilot attempted to retain control of the balloon and snuff the fire and two passengers either jumped or fell from the gondola, state police spokeswoman Corinne Geller said.

"Then witnesses recall hearing an explosion and the fire continued to spread," Geller said.

She said another pilot who was interviewed by investigators described how the pilot tried to open vents to release extra hot air in an attempt to keep the balloon from rising faster.

"Based on witness accounts, he did everything he could to try to save the passengers' lives," Geller said.

An air safety investigator with the National Transportation Safety Board said a preliminary report would be released on the crash in 10 days. Heidi Moats said investigators were seeking records on the balloon and the pilot.

Troy Bradley, past president of the Balloon Federation of America, said most serious accidents on balloons -- including fires, electrocution or baskets becoming severed -- happen after hitting power lines. Most of the time it's due to pilot error, he said.

Fatal accidents happen less often than with other types of aircraft, Bradley said.

"Hundreds of thousands of flights will go without any notice. That one that hits the news gets all the attention, but ballooning is a very, very safe form of aviation."

Johnson said the crash near the park about 25 miles north of Richmond occurred in an instant.

"One minute the balloons were hovering in a field behind Event Park, the next everyone is pointing at [the] sky," she said.

Carrie Hager-Bradley said she saw the balloon in flames on her way home from the grocery store and heard people yelling.

Donnell Ferguson said he was cutting grass when he saw a couple balloons passing by. One was low, barely at tree-top level.

"At first I saw a cloud of black smoke and then I noticed the basket on fire," he said. "Then it just took off real fast and disappeared."

Twenty balloonists from the Mid-Atlantic region were to participate in the weekend festival, said Greg Hicks, a spokesman for the venue. About 740 people attended the preview event.

"It's just a shocking situation for everyone," Hicks said.

Robert Rinck, who was operating a frozen yogurt concession, said he watched the balloons lift off against a beautiful sunset. A few minutes later, someone said a balloon was on fire. He looked up and saw fire coming from the balloon.

"I just didn't know why it was going up and not down," Rinck said.

Johnson, who went to the festival with her husband, photographed the balloon as it rose.

"I turned around and just automatically started taking pictures," she said. "It just kept going up, up, up in the air."

Some hot air balloons landed safely in Debra Ferguson's yard, The Free Lance-Star of Fredericksburg reported. One of the men in the balloons pointed up at another still in the air and said he thought it might be in trouble.

"As soon as we looked up, the thing blew up right there," Ferguson told the newspaper. "All I heard was, 'Oh my God, Oh my God,' and all you saw was the top of the balloon still flying, but all of the basket was gone. All of the flames just disappeared. ... It was like a match -- poof -- and then it was gone."